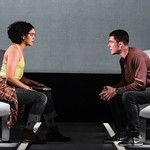 Haven’t you ever looked at people on the street, or in a plane, and wondered about their backstories – who they are and where they’re headed?

The Coast Starlight, a train that makes a thousand-mile journey from L.A. to Seattle, offers plenty of time for speculation.

Brooklyn-based playwright Keith Bunin rode the train when he spent some time in the Golden State. In a commission for the La Jolla Playhouse, he focused on people who come to California chasing a dream, and come to realize that we’re not all on solid ground.

“The Coast Starlight” began its development last year, as part of the DNA New Works Series at the Playhouse, which is now presenting the world premiere.

Six unnamed passengers progressively board the train. Though we hear from each of them, our attention centers on a young man facing a serious life dilemma: Should he return to Camp Pendleton and ship out for another tour in Afghanistan as a Navy medic? Or should he stay on the train and start a new life?

What we learn early on is that many of the ‘interactions’ among the fellow travelers are pure conjecture. Characters repeatedly admit, “I would’ve said this to you” —  if only they were able to reach out and connect.

The conceit is intriguing and the characters are fascinating, comprising a hothouse microcosm of the American experience, a diverse array of lost souls adrift. Each is on the brink of a seminal life decision.

Passengers on a train could be a challenging, static setup, but under the skillful eye of New York-based director Tyne Rafaeli and her inventive creative team, the stillness is an asset. The stark gray platform revolves; the seats are repositioned. With no distractions, we remain riveted by the stories and captivated by their potential outcomes.

A marvelous ensemble – all new to the Playhouse – brings these folks to wounded, piercing, vibrating life. We feel for every flawed one of them, straining to accept them without judgment and hoping they make some better choices so they can move on productively in their lives.

With wit, humor and sharp dialogue, Bunin offers us a study in compassion and a plea for communication.