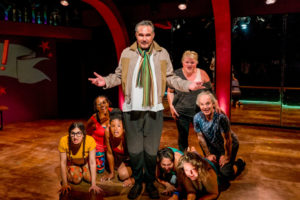 If you’ve ever wondered what pre-pubescent girls say to themselves and each other, Clare Barron’s “Dance Nation” has an off-the-wall way of showing you.

The competitive dance team from Liverpool, Ohio isn’t obsessed with boys. They’re preoccupied with their changing bodies, and their position in the pack.

Several characters have direct-to-the-audience monologues that reveal who they will become, and how this seminal youth experience will have shaped them. Most of these are quirky, raunchy or provocative; some, less so.

As the script demands, the performers span a range of age and body-type, and none are trained dancers. This allows us to see them simultaneously as their younger and older selves.

Not only their peers have a lasting effect on them. There’s also the stern, soul-crushing Dance Teacher, who pushes them hard and shows transparent favoritism, especially during the casting scene that pays blunt homage to “A Chorus Line.” This contest assures that the Top Dog and Second Banana, though best friends, will be locked in a rivalry that undermines them both.

At times, the team devolves into a primal, feral pack, sporting fangs, and spouting ritualized war-chants that promote ‘pussy-power,’ even though one of them is a diffident, besotted boy.

She has a fearless, crackerjack cast of nine to depict these fierce adolescents, age 11-14, as vibrating bundles of confidence and uncertainty, narcissism and doubt. Their pronouncements are unsettling, their loneliness, even in the midst of a group, profound.

Their stories will surely take women back, and may take men by surprise.