“A WEEKEND WITH PABLO PICASSO” at New Village Arts 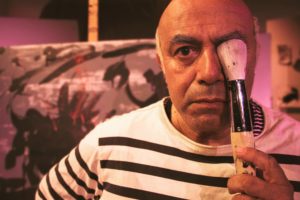 He was a genius, a Communist, a clown. A painter, sculptor, printmaker, ceramicist, stage designer, playwright, poet – and one of the most prolific and influential artists of the 20th century.

And you get to spend some time with him.

“A Weekend with Pablo Picasso” is a wonderful one-man show created and performed by Herbert Siguenza, first produced at the San Diego Repertory Theatre in 2013, and now, after making its way around the country, the piece has come home – this time, to New Village Arts in Carlsbad.

Picasso and Siguenza – a match made in heaven. The chameleon actor is an art school graduate, and co-founder of the acclaimed comedy troupe, Culture Clash. So, he has the acting, comic and painting chops.

Over the course of 80 minutes, he re-creates many iconic looks of the master: the white-rimmed bald head, the striped shirt, the baggy pants and sometime bare chest. Even, for a bit, the red rubber nose. He dances, he cavorts, he feigns a bullfight, and he philosophizes – about art, and life.

Everything in the text is taken from Picasso’s writings. There’s much wisdom on offer.

Siguenza and his director, Todd Salovey, devised a way to explain why the Master is talking directly to us: it’s a last-minute, high-profile commission. In his studio in the south of France, 1957, Picasso is told that a wealthy American collector wants six paintings and three vases completed in one weekend. We are art students, sent by his agent, to make sure the job gets done.

Picasso is a spry 76 years old (Siguenza, growing into the role, is now 60). He’s a pack-rat who’s been nicknamed The King of Trash. We watch him make something out of nothing, and paint rapidly several canvases, to boot. Some will be auctioned off to benefit the Teatro Pueblo Nuevo project at New Village Arts.

It’s glorious to watch and listen, to hear about fame and inspiration, family and aging.  And of course, art. Siguenza is magnificent. The evocative projections and the intimacy of the space bring Picasso as close as we’re ever likely to get.