“THE BOY WHO DANCED ON AIR” at Diversionary Theatre 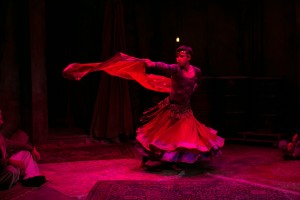 There are some stories you just can’t imagine becoming musicals: but a serial killer gave us “Sweeney Todd” and Presidential murderers inspired “Assassins.”

Now, along comes “The Boy Who Danced on Air,” a stomach-churning tale of the buying and abuse of young boys in Afghanistan, a long-standing tradition called Bacha Bazi, or “boy play.” The youths are dressed as girls and taught to dance for other men (purportedly to preserve marriages when husbands have certain ‘needs’); they’re often passed around and mistreated physically as well as sexually. Although the practice is officially against the law, men in power are often the very ones purchasing these “sex slaves” from poor families. And there’s every indication that the next generation will continue to do the same.

And yet, Tim Rosser and Charlie Sohne have created a moving, if unsettling musical that tells of love and desire, hopes and splintered dreams in a war-torn country that holds fast to its archaic customs.

Two adolescent bachas, Paiman and Feda, fall hesitantly in love. One is loyal and subservient to his master; the other craves the freedom of the big city. They plan to run away together, since once they start to show signs of adulthood, they’ll be cast off and married off.

Meanwhile, Paiman’s owner has plans of his own, though they’re less lucidly defined. His scheme, he thinks, will show that Afghans can take charge of their country.

How all this plays out, in heartfelt ballads with often poetic lyrics, is the crux of this surprisingly touching new musical, which is receiving a first-rate premiere at Diversionary Theatre.

The songs are beautifully sung, and evocatively played by a 4-piece band. The story takes some unexpected turns, as will your emotional response to it. You won’t see a musical like this again any time soon. Catch it if you can.