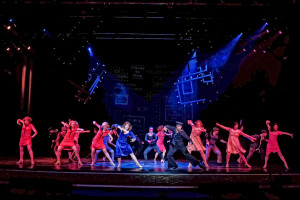 Sounds kind of far-fetched. But it actually happened, right here in Our Town. In 2000, Sutton Foster, a chorus girl, stepped up at the La Jolla Playhouse to assume the lead in “Thoroughly Modern Millie,” and went on to win a Tony Award and become a Broadway darling.

So, it can happen. But probably not in the way it does in “42nd Street.” The story appeared in book form first (1932), then as a Busby Berkeley movie (1933). Nearly 50 years later, legendary impresario David Merrick turned it into a Broadway hit, by borrowing a bunch of songs from the Harry Warren/Al Dubin catalogue.

The score is terrific, filled with classics like “Lullaby of Broadway,” “You’re Getting to be a Habit with Me,” “Shuffle off to Buffalo,” and of course, the irresistible title tune. But not all the songs hang together. It’s hard to believe the book (by Michael Stewart and Mark Bramble) won a Tony. There are some silly subplots and extraneous characters and interactions. The coincidences strain even musical theater credulity. It feels more like a jukebox musical than a book musical.

But what makes the show rise above theater cliché is the singing and dancing, especially the tapping. And in that, thanks to a very talented cast, under the guidance of music director Don LeMaster and choreographer Jill Gorrie, San Diego Musical Theatre shimmers. Director James Vasquez creates some fun stage business, too, including wonderful use of silhouettes and shadows.

The scenic design (Bret Young and David Medina), lighting (Michael Von Hoffman) and costumes (“coordinated” by Beth Connelly; no indication of where they came from originally) are attractive and varied.

It’s the characters and relationships that are under-developed. There’s absolutely no chemistry between the leads: perky, gifted Ashley Ruth Jones, a real find as Peggy Sawyer; and Gabriel Navarro as Billy Lawlor. His tap solos are fine, but his dancing is effortful in the partnering and lifts. With the exception of Robert J. Townsend as the gruff, demanding director, Julian Marsh (who basically plays that one, overmiked note), and rich-voiced Laura Dickinson as the fading diva, Dorothy Brock, there is little display of personality on the stage. Even the redoubtable Bets Malone, as writer/producer Maggie Brock, shows minimal persona, and that role can be a comic show-stopper.

On the night I saw the show (before all the kinks were ironed out for opening), there were miking/sound problems. Perhaps everyone was just getting down the moves and lines and vocals (Vasquez told me he’d just reworked a scene), and it will all come together once the cast really settles in. I hope so. There’s too much good stuff there for it not to edge one step closer to great.