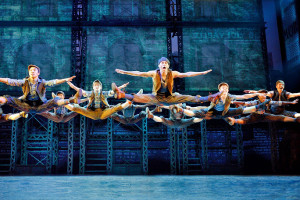 It’s a big week for dance musicals: San Diego Musical Theatre is presenting the tap-happiest musical of them all: “42nd Street” (at the Spreckels Theatre, through 6/12); California Youth Conservatory has “Billy Elliot” on its boards (at the Lyceum, through 6/5).

And now, along comes “Newsies,” the electrifying hoofin’ tuner making its San Diego debut at the Civic Theatre, courtesy of Broadway San Diego.

The inspiring story is based in fact: the 1899 New York City unionization strike by young newspaper carriers, organized by the kids after Joseph Pulitzer decided to cut corners at a tough time for his newspaper business, by taking it out of the hide of the very poorest of his employees- the mostly orphaned or runaway newsboys.

The real strike lasted two weeks, causing the circulation of Pulitzer’s New York World to drop from 360,000 to 125,000. The strikers demonstrated across the Brooklyn Bridge for several days, effectively paralyzing the City. The rallies drew thousands, to hear speeches from the magnetic leader, Kid Blink (Louis Ballatt, so-nicknamed because he was blind in one eye). Although Pulitzer refused to roll back the 60 cents-a-bundle price (a 10-cent increase) for his “papes,” as the news-hawkers called them, he did agree to buy back all unsold papers – and as part of the compromise deal, the union was disbanded.

The events inspired a 1942 DC Comics series titled “Newsboy Legion,” and a Disney movie, “Newsies” (1992), the basis for this Disney musical, which in 2012, was nominated for eight Tony Awards, including  Best Musical. It snagged two Tonys: for Christopher Gattelli’s amazing Choreography and the superb Score by Alan Menken and Jack Feldman.

The musical’s effective book, by Harvey Fierstein, highlights the close camaraderie of the boys, and adds a new love interest: Katherine, a young, female journalist who falls for Newsie leader Jack Kelly (the stand-in for Kid Blink), and helps publicize the strike and the cause, expanding it to include all the exploited child laborers of New York. Jack’s fantasy about escaping New York feels like a MacGuffin, but it was in the film, too, and spawned the lovely ballad, “Santa Fe.”

This musical is really about something – and it’s particularly pertinent in these days of extreme economic divide. It should be compulsory viewing for the entire financial top tier 1%.

They won’t go wrong with this national tour. Every element of the production is superlative, from the thrilling choreography to the movable tri-level metal set, to the class-varied costumes and the dazzling lighting. The score is dynamic and energetic, featuring a bevy of high-spirited rallying cries, the best of which were written for the film (“Carrying the Banner,” “Seize the Day”).

Which brings us to the cast – huge (28 strong) and hugely talented. The dancing is, in a word, phenomenal – athletic, acrobatic and strikingly precise. Primarily featureing leaps and spins, kicks and air-born splits, the choreography also includes a rousing tap number (“King of New York,” also in the film). One standout dancer, Jordan Samuels as Specs, manages to hang in the air miraculously, mid-leap.

The singing is also robust, and under the expert direction of multi-Tony-nominated Jeff Calhoun (who was here at the La Jolla Playhouse in 2009 to direct “Bonnie and Clyde”), the pace is lively and the story stays relentlessly engaging. The drama and the relationships are completely credible, and the connection between Jack and Katherine is palpable.

All the leads are outstanding – and on the night I was there, two were understudies, including Devin Lewis as smart, well-spoken Davey, who brings along his 10 year-old brother (spunky, funny 11 year-old Ethan Steiner at the performance I saw) to join the newsies after their father got laid off and had no union to support him.

Andy Richardson, who played the limping Crutchie in the Broadway cast, is excellent, as are big-voiced, brassy Aisa de Hass as the vaudeville chanteuse and theater owner, Medda Larkin, who harbors Jack when he’s trying to lie low; wonderful Kevin Carolan, who initiated the role of Gov. Theodore Roosevelt on Broadway; Steve Blanchard, aptly corporate and vile as Joseph Pulitzer; and understudy Becca Petersen, who’s delightful and sassy as Katherine.

At the center of it all is Joey Barreiro as Jack, a charismatic triple-threat who could motivate anyone to do anything. There’s a delicious naturalness in his performance that makes you root for him in both the political and amorous realms.

“NEWSIES,” brought to us by Broadway San Diego, runs through this Sunday, June 5 at the Civic Theatre,3rd and B St., downtown San Diego