“HOLLYWOOD” at the La Jolla Playhouse 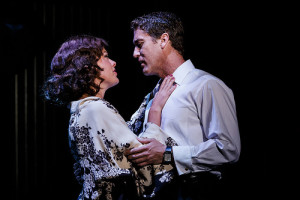 It’s a remarkable coincidence: two new plays at our two Tony Award-winning theaters, both based in fascinating historical fact.

One is all surface, no substance. The other is almost all substance, maybe too much, with occasional comic relief. One has no three-dimensional characters; the other is all about character. And ironically, the drama about politicians making policy is more suspenseful than the so-called noir thriller.

It’s 1922, and director William Desmond Taylor (also pretty bland) has just been murdered. Nearly 100 years later, the case is still cold; it’s never been solved. Confounding the bungled investigation, amid layers and layers of threats, bribery and people on the take, is our straitlaced, strident-voiced narrator, Will Hays, creator of the famous code that shut down studios and put actors out of work in the name of decency and a mass cleanup of the smut of Tinseltown.

The story is irresistible, but the play has no plot arc and no characters to care about. And Hays isn’t the only performer with a grating voice.

In the West coast premiere of Pulitzer Prize-winner Lawrence Wright’s “Camp David,” character is everything. Seemingly in real time, the long intermissionless play covers 13 fraught, grueling, tension-filled days in 1978, when three world leaders came together at our Presidential retreat in Maryland, to forge peace in the Middle East. Israel and Egypt have never had a war since.

Jimmy Carter, Menachim Begin and Anwar Sadat are presented as flawed, self-serving, religious men, each as concerned about his legacy as his country. Rosalynn Carter is there, too, charming the intractable adversaries and appearing to give her husband all the best ideas for moving the stalled talks forward.

The smart, information-packed play gets didactic and repetitive at times, but at The Old Globe, under Molly Smith’s direction, there are four superb performances and some truly affecting moments, which remind us that some leaders have the courage and fortitude to rise above even millennia of enmity and actually make miracles happen.