“THE BELLE OF AMHERST” at Lamb’s Players Theatre 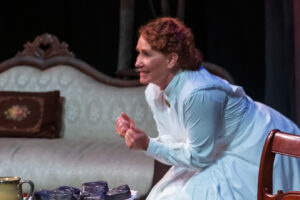 Who exactly was Emily Dickinson?

Her life, like her poetry, was eccentric and enigmatic. Before she died in 1886, at age 55, she made her sister Lavinia promise to destroy all her papers.

But unbeknown to anyone, she left behind nearly 1800 poems (only 7 were published in her lifetime). And one authenticated daguerreotype, taken when she was 17, showing her as plain and solemn.

Neither celebrated during her lifetime nor shortly thereafter, she ultimately became one of the most important and influential figures in American poetry.

For 200 years, scholars have conjectured about the details of her life.

After her uneventful youth (at age 14, she predicted that by 17, she’d be “the belle of Amherst”), she rarely left her father’s Massachusetts manse, known as The Homestead.

She became a recluse, spending most of her life in isolation (some posit that she was agoraphobic; others think she was hiding epilepsy).

From an early age, she endured the loss of many loved ones, and she never married. Was she a dour depressive? A sad spinster?

She had a penchant for older men, whom she called “Preceptor” or “Master” in letters. Or was she a lesbian? (she adored her brother’s wife, Susan, and dedicated a number of poems to her).  The movie, “Wild Nights with Emily” and the ongoing Apple TV series, “Dickinson,” explore this romantic relationship, in seamy, torrid detail in the case of “Dickinson.”

What her impassioned poems reveal is that she was obsessed with words and birds, flowers and nature, death and the afterlife.

In 1976, after two years of research based on extant letters, diaries and the poems, playwright William Lucas created “The Belle of Amherst,” a solo piece that suggests that Emily created her own peculiar persona. Rarely seen, she was known as The Myth in her neighborhood; in the play, she refers to herself as “Squire Edward Dickinson’s half-cracked daughter.”

“I love the game,” Lucas has her say. “I do it on purpose: the white dress, the seclusion. It’s all deliberate.”

Several years ago, at Write Out Loud’s annual TwainFest, a celebration of 19th century literature, I saw Cynthia Gerber present an excerpt of the play. Her performance moved me to tears. I told her she had to do the entire piece.

She was way ahead of me; she’d had that in mind for decades, since she joined Lamb’s Players Theatre in 1988. But producing artistic director Robert Smyth said she was too young. Now, he felt, she was ready, and he was ready to direct her. And this vehicle, perfect for her, was also the perfect pandemic ‘Welcome back‘ for the company’s 50th anniversary.

Far from the grim, straitlaced recluse of her reputation, this Emily is quite affable and amiable, graciously (though implausibly) entertaining a raft of visitors (the audience), offering a taste of her award-winning black cake, even dispensing the recipe.

On Mike Buckley’s attractive set (autumnal trees painted on a drop, fronted by dimensional trees onstage, with plenty of room for Michael McKeon’s projections of family photos and favorite words), she flits, like one of her beloved birds, from one playing space to another: from desk to sofa to tea table.

She’s a veritable chatterbox, an impish, slyly humorous charmer who, in Gerber’s hands, excels at imitating those around her: her stern but treasured father; revered brother; uncompromising mentor; and an elderly suitor, among others.

Gerber clearly relishes the character and the opportunity, and she’s delightful company.

In an expanded form and less intimate venue, the piece feels baggy, repetitive and less heart-rending. Wisely, Lucas intersperses poems throughout; the lighting (designed by Buckley) often changes to cue the recitation.

Many of Dickinson’s best-known works are here, mostly untitled and known by their first lines: “Because I could not stop for Death,” “Hope is the thing with feathers,” and in this context, the perhaps disingenuous “I’m Nobody! Who are you?” (I love all these, though I did miss “I heard a fly buzz when I died”).

Perhaps the poem that most directly reflects the tenor of the play is “Tell the truth but tell it Slant.”

You never quite know with Emily; she’s managed, despite the passage of time and myriad investigative eyes, to sustain the enigma and inscrutability.