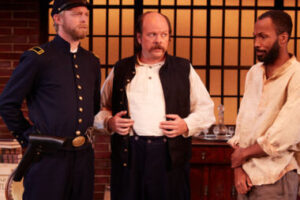 Talk about your controversial characters.

The real-life historical figure who inspired the 2014 play, “Ben Butler” (Benjamin Franklin Butler, 1818-1893; note that his brother’s name was Andrew Jackson Butler), was a sometime Democrat who voted 57 times to make Jefferson Davis President (and subsequently ran for the office himself). A Major General in the Union Army who had no military training. A successful trial lawyer (and a long-term member of Congress, dismissed from his post by President Lincoln and later considered by him for a Vice Presidential run), who repeatedly manipulated the law to his own financial and political advantage. An anti-Semite and misogynist who wrote an anti-woman order at one point in his life, but later strongly supported women’s suffrage, as well as authoring the Ku Klux Klan Act of 1871 and co-writing the landmark Civil Rights Act of 1875. Reviled in the South but revered by many in Massachusetts, his home state.

He was a bellicose demagogue, a ruthless speculator, a military bungler — but also an extraordinary innovator and a fearless advocate of justice for the underdog.

He was instrumental in creating the legal notion of legally freeing slaves by designating them as “contraband” of war, since their work served military objectives. This ultimately led to the Emancipation Proclamation and the end of slavery as an official war goal.

It’s the latter accomplishment, how Butler came up with the ‘contraband’ notion, that is the focus of Richard Strand’s smart, slick and delightfully entertaining play, which is receiving a superb production at North Coast Repertory Theatre, under the astute direction of David Ellenstein.

When we meet Butler in 1861, in his office at Fort Monroe, Virginia (beautifully designed and appointed by Marty Burnett; props by Phillip Korth), he’s only been in the Union Army for one month.

His adjutant, Lt. Kelly (wonderfully droll, ramrod-straight, boot-clicking, boot-licking Brian Mackey) is trying to inform his quarrelsome, cantankerous superior that three escaped slaves have just shown up in the Fort, fugitives seeking sanctuary, and one of them is demanding to see the General.

Butler (a magnificent, commanding, pot-bellied, impressively half-shaved-headed Richard Baird) immediately displays all his pugnacious pedantry; he does not take kindly to demands.

Their funny, language-rich back-and-forth gives a foretaste of the splendid wit and wordplay of the piece, whose clever badinage and arch humor continues with the terrific exchanges between Butler and the highly articulate slave, Shepard Mallory, expertly played, with deftness and nuance, by the New York and Philadelphia-based Brandon J. Pierce.

An amusingly disparate but highly similar pair, Butler calls Mallory “a collection of contradictions.” The two are equally argumentative, and neither will allow anyone to get the last word.

Soon, a kind of strawman will appear, in the person of an officious, supercilious confederate Major, who has come to pick up the “property” that belongs to his superior, Col. Charles K Mallory, and also, Butler learns from Mallory, to spy on the Fort’s artillery. Bruce Turk is perfect in his look and his thin, fragile veneer of Southern gentility.

When the Major makes demands, and uses the Constitution and the Fugitive Slave Act for support, Butler reminds him that Virginia has just seceded from the Union, so those laws no longer apply. (Plus, as mentioned, Butler gets prickly when anyone tries to make demands on him). The interaction does not go well.

It’s a triumph of writing that manages to teach us about history (all but the adjutant are real historical personalities), considering serious subjects such as political duty vs. personal/moral/ethical obligations, while repeatedly making us laugh, by means of characters who are deftly drawn, multi-faceted, and brilliantly portrayed at NCRT.

In this excellent production, which never tips into crass comedy or caricature, the costumes (Renetta Lloyd), lighting (Matthew Novotny) and sound (Aaron Rumley) work effectively in service of the text.

We believe these characters, flawed and self-sabotaging though they may be. And we don’t even begin to see the full extent of the complexity and contradictions of the real Ben Butler; far too much fodder for one play. This one gives just a peek, but it’s satisfyingly sufficient.