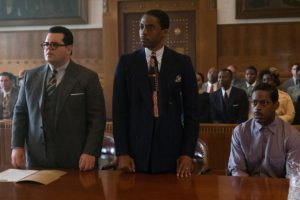 Fall is the season for pumpkins, cider… and film festivals: Venice, Telluride, Toronto, in particular. And for the 16th year, San Diego is throwing its hat in the ring… with the San Diego International Film Festival (October 4-8).

Since its inception in 2001, the SDiFF has become one of the leading stops on the independent festival circuit.  This year, more than 120 films will be screened, including features, documentaries and shorts. Fifty of those are foreign films. More than 68 countries were represented in the 2000 submissions.

Attendees can hear from first-time and veteran filmmakers, watch major studio premieres making their way through the Hollywood awards season, attend unique events, and select targeted film tracks chosen by community advisory boards, including Social Justice, Military, Native American, Environmental, LGBTQ and, new this year Equestrian (for all the local horse-lovers, horse-bettors and horse owners). There are also discussion panels to attend, with a focus on: Unstoppable Women, Social Impact, Actors, The Business Side of the Business, and another new addition, Branded Entertainment.

For the fourth year, the Festival host is long-term, New York-based film critic Jeffrey Lyons, whose co-host is actor/producer Scott Mantz from Access Hollywood. They donate their time to feed their passion for film; during the Festival, they’ll moderate panels and run Q&A sessions.

One of the most exciting aspects of this year’s Festival will be the appearance of the acclaimed and beloved actor, Sir Patrick Stewart (“X-Men,” “Star Trek” The Next Generation,” and scores of celebrated stage roles), to receive the Gregory Peck Award for Excellence in Cinema. The award was created with the support of the Peck family (with active participation from his daughter Cecilia), in honor of the renowned actor, activist and San Diego area native, Gregory Peck, who was born in La Jolla. The honor is bestowed on an individual whose work has made a profound impact on the art of cinema. In addition to his acting acumen, Stewart has been a supporter of Amnesty International, BeatBullying, Children of Peace, and Dignity in Dying, among others.

Prior recipients of the Peck Award are Alan Arkin and Annette Bening. Other actors to be honored at the VARIETY “Night of the Stars” Tribute (Oct. 5, at the Pendry Hotel downtown) include Heather Graham (“Drugstore Cowboy,” “Boogie Nights”) and Kumail Nanjiani (“The Big Sick,” TV’s Silicon Valley”).

A number of high-profile studio films will be screened at the Festival. The opening night premiere (10/4, at the Balboa Theatre) is “Marshall,” which spotlights one of the career-defining cases of a young Thurgood Marshall, the first African-American Supreme Court Justice. Reginald Hudlin directs Chadwick Boseman in the title role. The cast includes recent Best Actor Emmy-winner Sterling K. Brown, as well as Dan Stevens, Kate Hudson and Josh Gad. The film will be followed by an after-party on the rooftop of the Westgate Hotel.

A Change of Hands

Five years ago, the San Diego Film Foundation, which produces the Festival, was taken over by a quartet of film-loving locals (Tonya Mantooth, Dale Strack, Kevin Leap, Patti Judd) who wanted to expand the festival into a signature event for the city. When they took the helm, says executive and artistic director Mantooth, there were only about 3000 attendees. Now the annual attendance tops 20,000. At the beginning, almost 100% of attendees were from San Diego. Now, out-of-towners comprise more than 15% of the audience.

“We’ve built an industry reputation,” Mantooth says. “Three years ago, we developed a relationship with Variety (the entertainment trade magazine), which has become a significant media partner.” Over the years, Mantooth and her colleagues were able to snag the U.S. premieres of ‘Hidden Figures” and “Hell or High Water,” which had launched in Toronto. Their studio features have included “12 Years a Slave,” “Wild” and “Silver Linings Playbook.”

The timeframe for submissions begins in January. Selections are made by 65 screeners and programmers, with “eclectic tastes, and a wide range of interests, ages and ethnicities” (Mantooth herself is part Seminole). It’s a labor-intensive commitment; each screener may preview hundreds of films.

“It isn’t for the weekend filmgoer,” says Mantooth. “They have to really appreciate the art of film.”

Screeners rate each film they see, and the films move up the scale. There’s considerable variation in the experience level of the filmmakers; some don’t make the second round. According to Mantooth, “the toughest part is choosing the finalists.”

Each submission is seen by 4-5 screeners. “That’s a lot for a festival,” says Mantooth, who guides the tone, topics and issues touched on. She herself logs in some 350-400 viewing hours.

Mantooth is anxious to make the Festival specific to San Diego and its demographic. She works with her local advisory boards to determine the most salient issues.

This year’s topics of particular interest include refugees, sex trafficking, the environment, the interface between returning military and civilians, and the American Indian past and present.

Last year, Mantooth and her organizing group changed the mission statement of the Festival, to acknowledge the fact that film can be “transformative,” that it brings people together. The statement cites our “divisive world – separated by race, identity, country, shelter, health and economics.”

“We’re the most divided we’ve been in my lifetime,” says Mantooth, who is earnest about the Festival, but extremely affable and quick to laugh. “We’re looking for commonalities, rather than differences.”

Or, as the Mission Statement puts it: “The SDiFF uses film to explore global issues… to create dialogue, to encourage self-reflection and ultimately, to develop empathy.”

Mantooth thinks the Short Films (under 28 minutes) “really have their finger on the pulse of current events. They’re telling us what’s happening around the world. They’re always so relevant.”

A Few Films to Consider

Although she sees many of the films to be screened, Mantooth claims she doesn’t “have any favorite children.” But she does admit that five films were “standouts” for her:

“The Divine Order,” the surprising story of why women didn’t get the right to vote in Switzerland until 1971.

“Selling Isobel,” a cautionary tale about a young mother in London who is invited to take part in a photo shoot, but instead, she’s kidnapped and sold into the sex trade. The film is based on the true story of the lead actress, Frida Farrell, who will be present for the Q&A following the screening.

“Dog Years,” a funny, poignant tale of growing old, starring Burt Reynolds as an aging movie star forced to face the fact that his glory days are behind him. Though the main character has a different name, Reynolds is shown in some of his own films, and displays some of his own anger and regret.

“Lavender Scare,” a smart, fascinating documentary that traces the unrelenting campaign of the federal government in the 1950s (under Pres. Eisenhower) to identify and fire all employees suspected of being homosexual; they were thought to be a threat to the nation’s security and therefore unfit for government service.

“Wasted! The Story of Food Waste,” executive produced by chef/author Anthony Bourdain, the film shows how a third of all the food grown around the world is being thrown out; that’s 1.3 billion tons of food wasted. Not only are the staggering facts presented, but the film offers solutions for making changes in our lives that will have an impact on the world.

Over the years, Mantooth has realized that many people don’t know how to “do a Festival.” For her, “it’s about getting off your couch and your phone, and immersing yourself in a community of people who share a love of film. So, you don’t just go see a film and go home. You meet people, you start a dialogue, you get passionate about the film and have discussions you may not have had before.”

To start the ball rolling and to get people in the groove, she schedules monthly screenings (often pre-releases) leading up to the Festival, from February to July. Drinks and dessert are served, and there’s always and a post-film Q&A and discussion.

Mantooth also feels that a bit of explanation is also necessary on the subject of Short Films. “It’s “not just a mini-movie,” she explains. “They’re constructed differently. It’s like a joke, in a way. It requires a Setup, Exposition and a Punchline. The last minute is usually a surprise.

See what surprises you can unearth in the 16th annual San Diego International Film Festival.