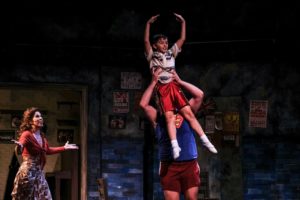 “Billy Elliot” is a bittersweet story of triumph and loss.

The musical is set against the backdrop of the UK miners’ strike of 1984, when Prime Minister Margaret Thatcher and her Conservative government made strong and systematic moves to dismantle the state-owned mining industry and destroy the unions (particularly timely, since the U.S. Supreme Court is set to strike a blow at unions in our country).

In the small Northeast England town where Billy grew up (bereft of a mother at a young age), he’s forced to enroll in boxing classes, and is expected to follow his father and brother into the mines with the rest of the townsmen.

But once he stumbles into a ballet class, he realizes that what he really wants to do is dance. The teacher, Mrs. Wilkinson (a sassy Joy Yandell) immediately sees his genius potential and his “Electricity.”

She trains him on the sly, hoping to snag him an audition with the Royal Ballet School in London. When Billy’s father and brother find out, they go ballistic. But through a series of insults, arguments and brawls, they come around.

As Billy’s prospects rise, the community, like those around it, is sinking. Despite their own dire circumstances, the downtrodden folks of the town help scrape together money for his audition, so his father doesn’t have to cross the picket lines to earn the needed cash.

The miners stay resolutely on strike for a year, but in the end, nearly all the mines will be shut down, and close to 300,000 miners will lose their livelihood.

So, while there’s wonderful camaraderie and “Solidarity” among the men, theirs is a harsh, bleak story. Billy is the ray of light in this grim landscape, though not everyone knows it at first.

The co-production of the 2005 musical, with a score by Elton John and book and lyrics by Lee Hall (who wrote the screenplay for the 2000 movie of the same name), is an excellent but curious collaboration between San Diego Musical Theatre and the California Ballet.

It seems like a perfect fit for this show, but in fact, there’s a lot less ballet, and a lot more tap dancing, than seems warranted by the story.

I remember being surprised when the national tour came to the Civic Theatre in 2013, that there was a big tap number (a nod to tap-loving musical theater audiences, I assumed). In this production, there are several tap numbers – and even a full-cast tap encore of “Expressing Yourself” (with all the men in tutus). Even the girls in Mrs. Wilkinson’s ballet class are predominantly musical theater kids, rather than ballerinas.

At the center of it all, as Billy Elliot, adorable, charismatic Del Martian Charlie Garton also seems far more comfortable in tap shoes than ballet slippers. He has some flashy moves in both dance forms, but he doesn’t exhibit the signature posture and stance of a ballet dancer or the sharp precision of a tapper.

In the seminal ballet scene, a “Swan Lake” duet between Billy and his older self (with the magnificent, highly experienced Zachary Guthier, now a soloist with Cal Bal), Charlie does multiple pirouettes (one of his specialties, though his landings are unstable), and he’s frequently lifted aloft by Guthier (the 10 year-old spends a good deal of time airborne in this production). His lovable, high-spirited personality carries him the rest of the way.

As Billy’s brother, Tony, Luke Monday is aptly pugnacious. Mackernan  Jarman is thoroughly engaging as young Michael, who’s the first to ask the musical question: “What the hell is wrong with ‘Expressing Yourself?’”

Morgan Carberry brings tenderness (amid the harsh surroundings and harsher language) and a warm, supple voice to Billy’s Dead Mum. Alexandra Gonzales offers comic relief as Billy’s feisty, forgetful Grandma. And, as a taciturn ballet accompanist emerging from the shadows, Danny Gersonde is a delightful surprise as a knockout dancer.

The men’s chorus is terrific. While their “Solidarity” number is inspiring, “Once We Were Kings,” their acknowledgment of defeat, is heartbreaking.

The grand gray set (uncredited) is impressive, though for some reason, the staging includes a great deal of carrying chairs on and offstage; the lighting (Christina Martin) is notable, and the costumes (Janet Pitcher) are spot-on. The night I was there, several miking problems and sound mixing imbalances made some dialogue and lyrics difficult to discern.

The distinctive North England accents are strong but authentic, thanks to the dialect coaching of British-born Vanessa Dinning, and the contributions, no doubt, of director Neil Dale, a Liverpool native. Thick as those accents are, they may take some getting used to for some.

The 13-piece orchestra, under the baton of musical director Don LeMaster, sounds lively and robust.

The energy level is high, but a 3-hour running time (the same as “Hamlet” at The Old Globe!) seems excessive. The plot-points and conflicts feel repetitive at times.

The musical, which won ten Tony Awards on Broadway, is based on the Stephen Daldry movie which was, in turn, inspired by A.J. Cronin’s 1935 novel about a miners’ strike, “The Stars Look Down” (in tribute, that’s the title of the opening number). This production is darker than the touring version, and therefore more consonant with the film.

But despite the downbeat elements, it’s Billy’s joy in dancing that carries the show; it’s contagious and irresistible. Personally, I would have preferred a lot more ballet – that’s what the story is all about, after all (tap is never mentioned in the text). I could have watched Guthier dance all night.

This was a huge undertaking for San Diego Musical Theatre, with a 37-member cast, perhaps the biggest in its 11-year history. It will be interesting to see how things evolve next year, when the company leaves the vast Spreckels Theatre and takes on the management of the more intimate Horton Grand Theatre downtown, which will become its new home base.