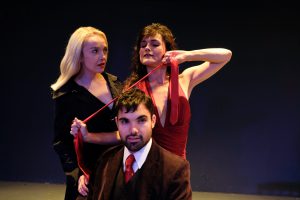 Can red herrings be packed in as tight as sardines? They can – and they are – in Rupert Holmes’ 1989 comic thriller, “Accomplice.”

The play has so many twists and turns, prepare for intellectual whiplash. Every time you think you know who’s who and who’s doing what to whom, the rug is pulled out from you and you’re thrown into a state of surprise and confusion.

The murders pile up … or do they? Suffice to say, to paraphrase Chekhov, if there’s a meat hook and winch in the first act, it’s going to be used (to ill effect) in the second.

This dramatic concoction is so clever and deliciously complex that it’s impossible to reveal any plot elements, so as not to spoil the fun.

Playwright Holmes, a British-American composer, singer and musician, may be best known for his 1979 hit single, “Escape (The Piña Colada Song)” and the musical “Drood” (1985; he wrote music, lyrics and book), which earned him two Tony Awards.

“Drood” was the first Broadway musical with multiple endings, which kind of set the stage for “Accomplice,” which followed a few years later.

At Scripps Ranch Theatre, the settings, characters and accents shift with neck-snapping speed (not all are perfect, but they’re mostly credible). It’s amazing that the actors can keep it all straight.

But director Jacquelyn Ritz has assembled a consummate cast, and she keeps them at a brisk, nimble pace.

Charles Peters plays a bumbler, among other, more serious characters, with delectable physical comedy (he does battle with an umbrella, and every time he walks down a two-stair entryway, he trips, masterfully).

Hannah Logan, gorgeous in every seductive outfit, is a hoot as a bevy of haughty, devious wives. Tatiana Mac is very funny as a series of blonde bimbettes, and the Understudy, Paul del Gatto, is consistently appealing and believable, too.  As the Dramaturg, Fred Harlow even gets to put his two cents in.

Besides all the plotting and scheming, the play is a self-referential, ultra-meta tribute to English murder mysteries and theater in general, with enough in-jokes to choke a Theater Queen.

One of my favorites: “People in Hollywood think Uta Hagen is a brand of ice cream.” (a reference to the legendary stage actress).

The set (Bob Shuttleworth) isn’t the peak of affluence referred to in the first scene, but it works fine for the remote, English moorish cottage, and other locales.

The 1970s costumes (Lisa Burgess) are delightful, and the lighting (Tabitha Wiebe) and sound (Ted Leib) contribute mightily to the mood and suspense.

In terms of plot (and its roller coaster convolutions), all that can be said is that there are husbands, wives, lovers, murders, a little torture, and shifting allegiances and accomplices.

Beyond that, you’re on your own to figure it out.