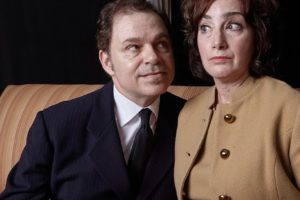 Phil Johnson is up to his old tricks: his bag of comic tricks, that is. Cast with a trio of terrific women, the relentless funnyman and comedic Everyman is the guy in the midst of a midlife crisis in Neil Simon’s 1969 comedy, “Last of the Red Hot Lovers,” now playing at North Coast Repertory Theatre.

At 47, Barney is starting to face down mortality. Having been married for 23 years, he feels that life – and the sexual revolution – are passing him by. So he decides to have an affair.

Over one year, two acts (and 2½ hours), Barney arranges for three assignations, in the least likely of rendezvous spots: his mother’s fastidious New York apartment. And he only has three hours till she gets home from work.

Barney reeks of flop-sweat; he’s neurotic, awkward and klutzy. Each meetup is a disaster in its own way. Barney’s too “nice,” too “decent” for this sort of thing: he can’t shut up, he can’t make the first move, he can’t get to first base.

The play feels dated, but it’s vintage Simon: quick with the quips and snappy one-liners, with a fixation on death roiling beneath the sunny surface.

Each of the colorfully caricaturish women has her little vice: Elaine, the sexy, sarcastic Katie Karel, endlessly swigs scotch; whack-job, hare-brained Bobbi, hilariously portrayed by Noelle Marion, is a rubber-limbed pot-head; and Jeanette, played by Sandy Campbell with prissy, weepy, purse-clutching precision, is dependent on anti-depressants.

The first act tends to drag, some moments are decidedly un-PC, and the whole proceeding feels like a sitcom of its era. But director Christopher Williams keeps the pace popping. The set and costumes are attractive, and the performances are impeccable.

And let’s face it; in 50 years, midlife crises haven’t gone anywhere. Neither has the feeling that the world is changing too fast, and whizzing by at breakneck speed.

So, Carpe Diem. Take what you can from this show, and have yourself a few well-earned laughs.