“SONGS FOR A NEW WORLD” streaming from Teatro San Diego 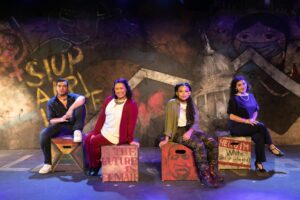 Surely, we’re living in a new world these days. The past 18 months upended everything, and the future is far from certain.

So, Jason Robert Brown’s “Songs for a New World” seems an apt choice for the inaugural (virtual) production of a new theater company, Teatro San Diego, a group dedicated to producing musicals.

“Songs” was the first produced show for Brown, who would later go on to win three Tony Awards for his challenging music and clever lyrics.

Neither a book musical nor a cabaret, the show was created in 1995, when Brown was just 25. He pulled together 16 songs he’d written for other projects (musicals, cabarets, concerts), all concerning, as he put it, “hitting the wall and having to make a choice, or take a stand, or turn around and go back.”

Whatever turn our lives were taking before, COVID has forced us to take a hard look at where we were and where we want to go or be — to re-visit, as these songs do, our hopes, dreams, fears, failures, potential and possibilities.

Though the pandemic is never mentioned or referred to in the Teatro San Diego production, this “color-conscious” company, “defining All American,” committed to “raising the visibility of the underrepresented communities of San Diego,” has certainly placed the piece squarely in our time.

The set (Reiko Huffman) is a couple of graffiti-spattered walls, with ‘Black Lives Matter’ and ‘Stop AAPI Hate’ scrawled in bold, angry letters. There are videos of political and civil rights demonstrations, as well as memorial gatherings to honor George Floyd and other murdered Black citizens.

Now these vocally demanding songs, personal and intense, linked only by the theme of transition from the old to the new, take on a different hue and urgency.

The four “characters” who sing these jazz-, pop-, or gospel-infused story-songs, heart-rending ballads and aching cries for change, were typically just indicated as Man 1 and 2 and Woman 1 and 2. Here, they’re played by three women and a man, each given an additional label: Feminism, White Privilege, Racial Justice, Gender Equality and Sexuality.

The fit isn’t precise for every song, and some of the very specific musical structures or references (e.g., the Kurt Weill parody, “Surabaya Santa”) is lost in the social justice leitmotif — and that song happens to be the only comic number in an otherwise fairly dark lineup.

It’s an auspicious beginning for the one-year-old company, which hopes “to bring theater physically closer to the people with less access to the performing arts.”

At this moment, streaming seems like the perfect way to accomplish that goal.

Here’s to a Brave New World for all of us.