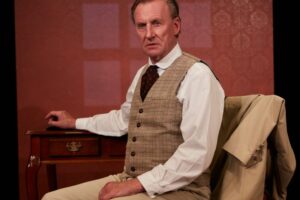 The Hippocratic Oath (“First, do no harm”) takes a turn toward the Hypocritic in the hands of Dr. Glas.

Based on an acclaimed, but at first controversial Swedish novel (1905, by Hjalmar Söderberg), “Dr. Glas,” a new stage adaptation by Jeffrey Hatcher, presents the titular 19th century medic as a supercilious prig who longs for love (he only had it once, fleetingly, some time ago).

Now, he’s obsessed with another man’s wife. The man is an even bigger prig, a parish priest who is, by all accounts, unsightly and repugnant. When the beautiful young wife comes to the doctor with a fervent but unusual request — to help her keep her odious, reviled husband out of her bed — all the pent-up passion of the years is unleashed. Dr. Glas’s obsession with the young woman puts him into moral and existential distress.          The doctor lies, he schemes, he plans the perfect murder.

The book was written in journal form, the private ruminations of a lonely virgin of 33. In Hatcher’s play, the doctor is middle-aged; his chances have clearly passed him by. He tells his tale as a monologue, a first-person confessional, which at first feels like it’s heading into the paranoid thriller- territory of Poe’s “Tell-Tale Heart”( 1843), but with less ultimate payoff.

This story does ramp up the suspense, but takes its time in unspooling, which makes the short piece feel long. We get a good sense of the weather (it starts in sultry summer, ends with the first snow); the environs (carriage horses, etc.); and the inner workings of a cynical, wry, judgmental mind.

Glas considers himself “sadistic,” admitting that he’s “the last person to be a doctor,” because he’s “not the heroic type” and the profession demands “too much contact with humanity.” (Did I mention misanthropic among his various unsavory character traits?).

Of necessity, given his profession — and by nature — Tyko Gabriel Glas is “a man of limited emotional variety” who leads “a life of second-hand perceptions.”

Yet his imagination runs wild when it comes to this damsel in distress, and where his mental meanderings take him is the crux of the narrative. Is this more a deformation of Dostoevsky (Crime Without Punishment?) than Poe? The piece does question the spiritual cost of killing, but whether or not there is a cost you can judge for yourself.

Over the past 18 months, in the time of COVID and quarantines, this is the eighth hybrid/filmed production NCRT has presented. With an effective three-camera shoot (and astute editing by Aaron Rumley), the company has brought us as close to live theater as we could get while sitting at home.

The result is a taut psychological crime story, well directed, with a potent and convincing performance and a smooth, seamless production.

It would be nice if, even after North Coast returns to live performances, these hybrid filmings would continue — for archival use and, in view of the uncertainty of the virus, its variants, and the restrictions it may once again demand. The series has been delightful.