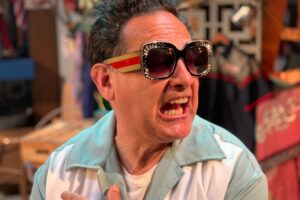 “Mr. Incréible.” That’s what Cris Franco’s father called him. But the moniker should really be applied to Ricardo Salinas, who portrays him in “57 Chevy.”

The comic memory play isn’t about a car, although the titular auto was a beloved family possession — and the ultimate symbol of The American Dream.

“57 Chevy” is Cris Franco’s homage to his father, a gifted mechanic who loved his two-tone hard-top more than anything — except his family.

Cristobal Sr. lamented the fact that his son, sarcastically dubbed “Mr. Incréible,” whom he brought to the U.S. from Mexico City in the 1950s, would never be “a doctor, a lawyer, or at least an engineer.”

Instead, Junior became a writer — and although that wasn’t one of his preferred professions, his father would be thrilled with this tribute, which premiered in 2015 in a workshop production at the Los Angeles Theatre Center, directed by Valerie Dunlap, who’s credited as co-creator.

After a one-night showcase performance two years ago for the Latinx New Play Festival at the San Diego Repertory Theatre (which I was lucky to have seen —and loved), the Rep is bringing back the solo show in a beautifully filmed streaming version.

The guy can do anything. Incréible, indeed.

We get to understand Cris Sr., his love of the U.S.A., his ambition to own his own garage (he did, quite successfully) and have his children — especially his only son (the fourth of five offspring) flourish and prosper.

On the other hand, Dad refused to allow his wife to learn English at night-school and insisted that his children attend Catholic School (what Cris calls “Our Lady of Perpetual Chastity” and “Our Lady of Perpetual Tuition”), and demanded that his house be run by strict rules that would make his children behave, unlike the “very very bad” American kids, who have no respect. Once they walked through the door, he said, “Esto es México!”

But then, when he was 10, the family moved up and out. Junior was the only Mexican on his street, in his school and at church. He called the homogeneous neighborhood “Same Fernando Valley.” He was eternally struggling to fit in, to be accepted.

So, besides being a loving (though at times conflicted) Father-Son story, this is an immigrant, displacement/assimilation story,  with its inherent clash of cultures, customs and generations.

It’s a compelling, 85-minute journey, well-written (with additional dialogue by Salinas) and well-directed — by Herbert Sigüenza, resident playwright at the Rep and Salinas’s compatriot co-founder of Culture Clash, along with Sam Woodhouse, co-founder and artistic director of San Diego Rep.

The production is outstanding; the design work is superb: scenic design by Christopher Scott Murillo, lighting by Mextly Couzin, sound by Matt Lescault-Wood, costumes by Carmen Amon, music by Fred Lanuzo. And the filming is expert: cinematography by Tim Powell and projection design by Elizabeth Barrett. There’s even a treasure-trove of Franco family videos and photos at the end.

But the real joy, the source of exuberance and exhilaration, is watching Salinas gambol about that overstuffed garage and make every dusty item into something else, re-purposing seeming junk to create a memory, a family, a lifetime.

There are too many characters and bits to pick out a favorite — though Father Sullivan’s mile-a-minute mass, in Latin and English (presented at warp-speed so the priest can get to his golf game) is pretty astonishing, and the competitive wailing aunts at grandpa’s Mexican funeral (“they put the ‘more’ in mourning”) is flat-out hilarious.