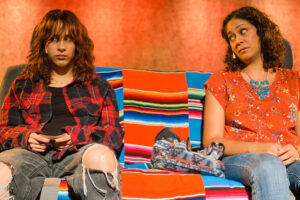 We hear and read these words every day, but they often feel distant, disembodied, just a list of disastrous statistics. We know the issues, but not always the individuals, or the personal toll, the struggles, repercussions and heartaches that are inherent in the problem.

Playwright/lyricist Quiara Alegria Hudes, whose work has won Tony Awards (“In the Heights”) and the Pulitzer Prize (“Water by the Spoonful”), teamed up with musician/composer Erin McKeown (music and lyrics) to bring the border disorder home, to a very intimate level.

“Miss You Like Hell” got its start at the La Jolla Playhouse in 2016. The semi-staged workshop production was small and specific, individualized and emotional. The full-scale production later that year was overstuffed and overblown; the piece had lost much of its charm. It was revised for a 2018 Off Broadway production at Lincoln Center and is now making the rounds.

For its local small-theater debut, the play and its rights were gutsily snagged by Patio Playhouse in Escondido, which returns the piece to its intimate, personal roots.

The production features minimal technical intricacy (basically a bare stage, with actors and musicians onstage throughout, and set-pieces rolled on and off; set design is by Matt FitzGerald, the theater’s Artistic Manager, who also plays bass in the band).

The focus is placed precisely where it belongs: on a strained mother-daughter relationship and the U.S. immigration policies that have ripped them apart.

Beatriz (formidable Vivian V. Schmitz) is the undocumented Mexican mother who lost custody of her daughter, Olivia (compelling Violeta Ruiz-Lopez) to the white man who fathered her but never married his collaborator in her creation.

Beatriz is a wonderfully multi-faceted, complex and flawed character, a free spirit who made some bad choices but didn’t willfully abandon her child, as Olivia thinks. She’s been fighting to get Olivia back for all of the girl’s 16 years.

But the two have been estranged for the past four years, and Olivia, emotionally damaged and neglected at home, considers herself a “castaway.” On her blog of that title, she’s recently announced to her loyal followers that she’s contemplating suicide.

Beatriz saw that post and at 4am, she shows up in her battered Datsun pickup, outside Olivia’s Philadelphia window, to spirit her away for a weeklong cross-country bonding road trip.

Olivia is sour and distrustful. And she has good reason. Beatriz does have an ulterior motive.

Olivia, who has been living in an unkempt, unwashed, pajama-ed state, reluctantly agrees to go off with her mother and give their relationship a try.

Soon, in an all-too-familiar scene for illegals (or any people of color), Beatriz gets stopped for a broken taillight and gets taken away in handcuffs for driving with a fake license and registration. (She also happens to have a Misdemeanor charge for marijuana from 16 years ago).

The car crisis kicks Olivia into gear, and she become the “Lioness” (“Leona”) her mother says she is. There’s lots of Spanish woven into the text, though Olivia’s knowledge is limited and rusty, which helps us gringos.

Along their journey, the two women have made friends with other ‘outsiders,’ a colorful group that includes an older gay couple (delightful Brian P. Evans and Jason Schlarmann); a bereaved, tamale-making Peruvian widower (engaging Rick Hernandez); and a lonely ‘Castaway’ follower, a junior ranger at Yellowstone Park (big-voiced Carjanae Evans), who become an extended family and help Beatriz and Olivia through their seemingly endless tribulations.

As one song puts it, “If we tie our rafts together, are we really at sea?”

But as Beatriz sings, “I’m only one slip away,” and things don’t exactly turn out as expected or hoped for. The score is also unpredictable, written in a range of musical styles, from ballads to island rhythms to norteñ0 beats, with spiky tempos and rhymes.

I’ve seen the show three times now, and I still can’t hum, sing or remember one song — but the emotions they express are searing and real, and the humor in the dialogue and some lyrics is a pleasant comic relief.

Patio is a ‘community and youth theater,’ so the ensemble’s acting and dancing chops are variable. But the singing is strong, and the 6-piece band (under the baton and music direction of Erika R. Gamez) provides impressive accompaniment.

Director/choreographer Elizabeth Arellano, who has worked at a range of San Diego theaters, has given her seven-member ensemble very basic moves. Some of them come off as pretty clunky; the production might be better without them.

But all the main and secondary character roles are nicely inhabited, and there’s a great deal of heart in this spare production, which makes the most of the musical

Kudos to Patio, a company that has often refused to shy away from tough or topical subject matter, or a theatrical challenge. They deserve a large audience for this very timely musical, which personalizes the headlines and shows one heart-rending, sympathetic side of the multi-faceted, tortuous immigration issue.