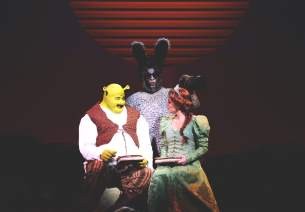 We all know it’s not easy being green. Just ask Kermit – or Elphaba. But it’s even harder if you happen to be a scary ogre with a soft heart.

Poor Shrek has had a rough life. Now, all he wants is solitude, and a nice piece of swamp to call his own. But he’s invaded by a horde of Fairy Tale characters, led by a belligerent Pinocchio and a feisty Gingerbread Man, who rope him into a journey – to petition the Prince, the nasty homunculus, Lord Farquaad, who first requires Shrek to complete a quest: slay a dragon and rescue a princess. Then Farquaad can marry her, and be officially crowned Tyrant-in-Chief.

Meanwhile, Shrek has attracted a clingy, smartass Donkey, who falls for the fire-breathing dragon. Shrek, of course, is smitten by neurotic Princess Fiona, who turns out to be… well, why ruin it, in case you haven’t seen the 2001 Oscar-winning animated film.

But don’t miss Moonlight Stage Productions’ knockout presentation of “Shrek, the Musical,” with its kid-friendly story and sly adult humor.

The 22-member cast boasts terrific actors, singers and dancers, cavorting in a mind-boggling array of rented sets and costumes.

Recent Tony Award-winner Jeanine Tesori composed the music, with book and lyrics by acclaimed playwright David Lindsay-Abaire. The result is a clever and engaging show, with its sprightly, singable score excellently played by a 15-piece Moonlight orchestra.

As directed and choreographed by David Vaughn, the first act drags at times, until Fiona appears. Then it kicks into high gear – and stays there. Electrifying performances by T.J. Dawson and Michelle London make the Shrek/Fiona connection enchanting. Marc Ginsburg is amusingly narcissistic as Farquaad, and the Fairy Tale characters are lovable and comical. A special shoutout to big-voiced 14 year-old Jaidyn Young as Teen Fiona.

If you haven’t got any young kids to bring, go anyway. We never outgrow our affection for fairy tales – or our need to be reminded not to judge anyone by stereotype or outward appearance.

“Shrek, The Musical” runs through August 29 at Moonlight Amphitheatre in Vista.