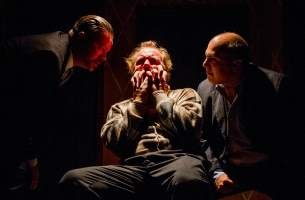 ANOTHER REASON TO REVEL IN NEW FORTUNE: THEIR PRODUCTION OF “THE BIRTHDAY PARTY”

The title sounds so festive. But since “The Birthday Party” was written by Harold Pinter, expect more menace than merriment.

The late Nobel laureate penned this disturbing drama in 1958, and it was greeted (as still often happens) with head-scratching and hostility.

We don’t really know exactly what’s going on here. And that’s Pinter’s point (Life is like that). Rumpled, broken Stanley (Max Macke, effective, but overplaying the scowl) is a lodger in a rundown English boarding house run by ditsy, chatty Meg (a delightful Dana Hooley, who both adores and infantilizes Stan) and her taciturn husband, Petey (Marcus Overton). A local young floozy (Amanda Schaar, sexy, but sporting an odd, unidentifiable accent) drops by.

And then, two new lodgers elbow their way in. It’s never clear why they’ve arrived, who they’re working for, what Stanley has to hide, or what they plan to do with him. Their highly intimidating interrogation is part fast-paced comedy routine, part hair-raising terror tactic. Matthew Henerson and Richard Baird are a dandy duo as the two thugs, one a loquacious, kibitzing Jew; the other, a dour, hulking Irishman (the oppressed becoming oppressors, according to Pinter).

The festivity of the title (though Stanley insists it’s not his birthday) is a harrowing event that, when it’s done right, is hard to forget.

At New Fortune Theatre, under the direction of Richard Baird, it’s done right, indeed. The endless looping dialogue, the lies, the non sequiturs, the delusion of self and others, the obliteration of a man before our eyes: These are all carefully wrought, perfectly timed, expertly acted and directed, with fine support from the scenic design (Marty Burnett) and lighting (Matt Novotny).

Pinter, the son of Jewish immigrants from Eastern Europe, said his work was influenced by the anti-Semitism he experienced as a child. “The Birthday Party,” his first full-length play, was written when he was just 27. He obviously hadn’t forgotten what it was like for brutes to show up at the door and drag someone off, never to be heard from again. The comedy here is bitter; the cruelty is palpable.

The New Fortune Theatre production of “THE BIRTHDAY PARTY” runs through August 30, at Moxie Theatre, 6663 El Cajon Blvd., in the Rolando area near SDSU

Performances are Wednesday at 7pm, Thursday-Saturday at 8pm, Sunday at 2pm

Tickets ($15-$26; FREE if it’s your birthday) are at www.newfortunetheatre.com