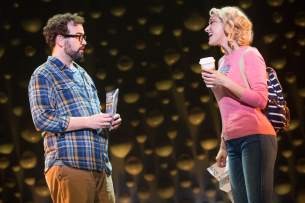 Did you ever look at someone you thought you knew and wonder, ‘What is going on inside your head?’

Well, the world premiere musical “Up Here” gives us an inkling of what’s ‘up there’ for one nerdy, shy, smart, introverted guy: Dan, the computer-man, engagingly played by Matt Bittner.

We meet all the conflicting, disruptive characters in his mind – who sing, dance, cavort and keep him from living his life or making any real connection – especially with adorable, irresistible Lindsay, adorably played by Betsy Wolfe.

The new musical has a powerhouse braintrust behind it: book, music and lyrics by Kristen Anderson Lopez and Robert Lopez who, separately or together, gave us the music for the animated megahit, “Frozen,” and the Tony Award-winning “Avenue Q” and “The Book of Mormon.” Their director is the wunderkind Alex Timbers and the in-demand Broadway choreographer is Joshua Bergasse. So, what happened?

The Lopezes have said the on-again/off-again love story parallels their own lives and personalities. The show’s been in the works, and in the creators’ minds, for a long time, and it’s vastly overstuffed. In fact, it’s over-stimulating and hyperactive.

Act I starts out with the dynamic title song, and the show remains pretty much at that feverish, frenetic pace for two-plus hours.

Along the way, we meet the Critic, the Humbug and the Can-Do Guy inside Dan’s head, not to mention dancing cacti, jousting medieval knights, New Zealand Haka warriors, clowns, acrobats, puppets, manic psychedelic lighting – and a rock. That rock, and the young boy who talks about it, need to go. Likewise, the non-contributory B-plot, about Lindsay’s neuro-atypical brother and his unlikely love interest.

There are real kernels of truth and depth in the show – about how our minds can sabotage our choices and relationships. But the good stuff is buried under the avalanche of outrageous costumes and anthemic songs. The score overall is pleasant, and it’s extremely well sung, played and orchestrated. But by the end, all you feel is sensory exhaustion. You just kind of wish all those voices would pipe down, so Dan and Lindsay can go off into the sunset, and you can get a moment to quiet and clear your own busy brain.

“Up Here ” runs through September 6, at the La Jolla Playhouse.