Review: “Breaking Up Is Hard To Do” 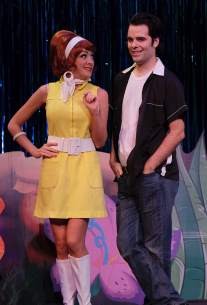 Sedaka Songs go Catskills: Premiere Productions’ “Breaking Up is Hard to Do”

My grandmother is rolling in her grave.

Premiere Productions is doing a show set in the Catskills, circa 1960, with a main character who’s a classic Borscht Belt comic. Both onstage and offstage, characters have blatantly Jewish names, and some are written in obvious New York/Jewish dialect. Yiddishisms punctuate the dialogue. The two leading ladies, one smart but klutzy, the other savvy but dim, are from Brooklyn.

And yet, when referring to the deceased loved ones, characters named Harvey Feldman or Esther Simowitz repeatedly cross themselves like Catholics. Oy, vey! Sorry, Grandma.

This production might as well have been set in Iowa. There is absolutely no sense of the Borscht Belt here (maybe the Corn Belt…).

Not to mention, the show’s 18 peppy, pop-rock Neil Sedaka songs are accompanied by clunky, pokey-paced canned music that sounds like bad karaoke. On top of that, several singers are consistently sharp, and the harmonies don’t match the style of the songs. And one singer has such a strong tremolo that her voice is a distraction, throaty in resonance and completely unsuited to belt-y pop singing.

The fault is not with the show. Though jukebox musicals often seem to be shoehorning famous songs into a forced or silly plot, this one, with a book by Erik Jackson and Ben H. Winters, has a credible enough story (more or less), and some of Sedaka’s finest, from the unforgettable title tune to “Calendar Girl,” “Happy Birthday, Sweet Sixteen,” “Stupid Cupid,” “Where the Boys Are” and “Love will Keep Us Together.” There are also a few lesser-knowns, some of which slow down the show.

Sedaka, who composed more than 1000 songs, was a consultant on the script. This unabashedly goyish production would make his grandma roll in her grave, too.

There’s one knockout performance: Erica Marie Weisz, as the malaprop-spewing Lois, who tries to create a fun weekend for her best friend, Marge (Vanessa Kramer), who was jilted at the altar. This was to be her honeymoon, but fun-loving, stagestruck Lois tries to line up some distractions for Marge, pushing her together with the narcissistic lounge lizard, Del Delmonaco (Daniel Newheiser, funny and appropriately over-the-top). Things go awry, of course, but love conquers all in the end, with a clumsy though talented nerd named Gabe (David Sasik) who’s the yin to Marge’s geeky yang. There’s a romance budding in the older generation, too: between the owner, Esther (Holly MacDonald Younghans) and the comic (Douglas Davis). Has no one here ever seen “Dirty Dancing?” Or heard the correct pronunciation of the most famous hotel in the Catskills, Grossinger’s?

Even the aptly cheesy set (‘Esther’s Paradise’) is misguided in design, a Hawaii-themed stage with an Easter Island Moai instead of tiki statues. The lighting and sound were inconsistent on opening night, but the costumes, especially for Lois, were cutely appropriate to the ‘60s, when Sedaka was in his heyday.

Premiere’s co-founders Randall Hickman and Douglas Davis do everything but take tickets (they do that, too, in their own Vista location); one or the other produces, directs, choreographs, performs and designs sets and costumes. After years of running their own space, they branch out occasionally to the much larger Welk Theatre. They seem to know their (loyal) audience (they mounted this same show in 2010, with some of the same cast). But they clearly don’t know the Borscht Belt.   Maybe they don’t care. But some of us do.

Premiere Productions’ “BREAKING UP IS HARD TO DO ” runs through August 23 at the Lawrence Welk Resort Theatre, 8860 Lawrence Welk Dr., Escondido

Performances are Friday and Saturday at 8pm; Thursday, Saturday and Sunday at 1pm