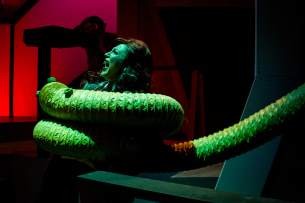 Fasten your seatbelts. It’s a bumpy ride: an intergalactic space flight that is a mishmash mashup of B-level 1950s sci fi, The Bard and 1960s music. Sounds wacky, right? It is. And not always in a good way.

At New Village Arts, “Return to the Forbidden Planet” has a far better cast and production than it deserves. This jukebox musical spoof, created by playwright Bob Carlton, premiered in England and unbelievably, won the Olivier Award for Best New Musical in both 1989 and 1990.

The plot is convoluted, obliquely inspired by “The Tempest,” though the quotes come from all over the Shakespeare map. Some are cleverly employed (“Live Long and Prospero,” for example). Others, not so much (“Two beeps or not two beeps? That is the question.” Or, “Out, damned Blob!”). Thud. And groan.

I guess if you’re an early sci-fi fan, you’ll grok it. The clips from cheesy, low-budget productions past are a hoot in Blake McCarty’s excellent projection design.

The direction, choreography and musical direction highlight the capable cast. But the sound is problematic; dialogue and lyrics were often overpowered and unintelligible the night I was there.

There is a story, of sorts, but it’s buried in all the space and plot detritus: Prospero,   marooned in space with his young daughter Miranda, abandoned by the wife/mother, Gloria. The ship we’re on is drawn to Prospero’s planet by force. Our crew has to deal with a snakelike monster, a potent ‘X-factor’ drug, “reverse polarity” and a “Teenager in Love,” before finding out that G-L-O-R-I-A” may not really be the villain of the piece.

Performance standouts are Kevane La’Marr Coleman as a deliciously robotic Ariel, and Kelly Derouin as an adorably oversexed Miranda.

A sound-track and fake onstage guitar player accompany a boatload of songs, very well executed, ranging from “Good Vibrations” to the annoyingly recurring “Don’t Let Me Be Misunderstood.” I suppose that could be the theme song of this show. And I guess I just didn’t get it.

“Return to the Forbidden Planet ” runs through September 6, at New Village Arts in   Carlsbad.