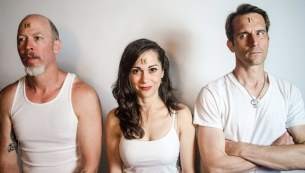 “PARLOUR SONG” AN OMINOUS AND AUSPICIOUS START FOR NEW THEATER

In this dark-hued portrait of middle age, some of the symbolism is a bit heavy handed: there’s the demolition of obsolete buildings (Ned’s job), and the fact that, for poor Ned (Mike Sears), “everything is disappearing.” There’s extreme hunger and unquenchable thirst. Point-scoring Scrabble features prominently, as does rain (purging? purifying? flooding?). And there are the trappings of encroaching mortality: Rogaine, frenetic exercise, sex advice tapes. And oh yes, Adultery, a necessity in this type of setting. .

Butterworth spins these tropes with a heavy dose of paranoia and menace. His work is an ominous amalgam of Pinter and Cheever, served up with a dollop of humor and a boatload of ambiguity.

The play represents a stunning debut production from the new Backyard Renaissance Theatre, founded by approaching middle-agers Francis Gercke and Jessica John, a married couple who appear as two sides of the drama’s triangle. The third is the redoubtable Mike Sears, whose wife, talented Lisa Berger, directs. So, this arid-marriage parable is a connubial affair.

Berger, a mistress of the macabre, handles the tonal shifts with aplomb. Gercke and Sears give superlative performances. John, whose character should be more seductive, is a hotbed of discontent. There’s an undertone of unhappiness and hopelessness in them all.

Some of the symbols become palpable. Joy (a misnomer if ever there was one) is full up with her husband’s cooking, but ravenous for his best friend, Dale (Gercke). Ned’s paranoia seems to be justified: all his belongings (from a stuffed badger to a lawnmower, soapstone birdbath to a bust of Aldous Huxley) actually are disappearing, though they make a ‘comeback’ of sorts in Michael McKeon’s deceptively simple set. Even in the scenic design, what you first see is not all there is.

Inside these allegedly pleasant homes and marriages, misery lurks. And extending another metaphor, Butterworth has Dale, our sometime narrator, ask: If there’s “a door you never saw before in your own house, would you open it?”

There are wonderful moments here, particularly Sears’ hilarious attempts to get in shape and to learn how to perform oral sex. The dialogue is terrific, especially in the male-bonding moments. Each character tries to deal with melancholy and malaise in a different way. But each remains enigmatic to the end. How much is reality, dream, fantasy, denial? It’s all in the eye of the beholder.

Performances are Thursday-Saturday at 8pm, Sunday at 2pm and 7pm