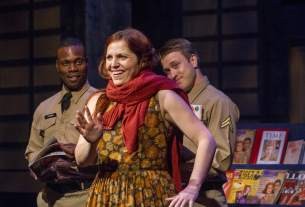 Nobody makes it through life unscarred. But Violet wears her wounds more prominently than the rest of us.

A native of rural North Carolina, she was facially disfigured by a wayward axe blade at the age of 12. Taunted and rebuffed all her life, she’s become tough, insightful and resilient. Her faith, her father and her late mother’s Bible have helped her survive.

Now an adult, Violet thinks her only recourse is to travel to a Tulsa televangelist, who’s sure to heal her, and make her beautiful. It’s 1964, with the story set, somewhat tentatively, against the burgeoning Civil Rights movement and Vietnam War.

The musical, “Violet,” composed by recent Tony Award winner Jeannine Tesori, with book and lyrics by Brian Crawley, was based on the short story, “The Ugliest Pilgrim,” by Doris Betts. The show’s evolution has been as bumpy as Violet’s face. It briefly premiered Off Broadway in 1997, but didn’t open on Broadway until 2014, in shortened, one-act form, and still had an abbreviated run.

Now, “Violet” has come to the San Diego Repertory Theatre, and artistic director Sam Woodhouse has mounted a splendid production, with a wonderful, malleable cast of eleven playing multiple roles.

The story is both too straightforward and too murky. The love triangle doesn’t quite work, after Violet meets two soldiers – one black, one white – on the bus. But the music is joyful – an energizing mix of country, blues and gospel.

The play may be flawed, but not the production, with its terrific singing, simple but effective set, story-enhancing projections, lighting, sound – and knockout band.

Big-voiced Hannah Corrigan is steely, ebullient and indomitable as Violet. The conceit of all productions is that nothing is actually displayed on Violet’s face; as Hitchcock taught us decades ago, what we imagine is worse than what can be shown.

So don’t turn away. Take a good look at “Violet.” Like her, you might just learn a little something about outer and inner beauty.

“Violet ” runs through September 13, at the San Diego Repertory Theatre in Horton Plaza.