“The Comedy Of Errors” – The Old Globe 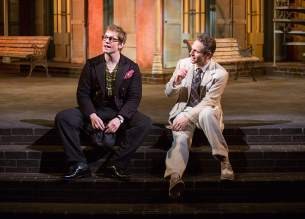 An early work by William Shakespeare, “The Comedy of Errors” is so silly, with its multiple mixups and mishaps, that setting it almost anywhere can’t harm it.

The two sets of identical twins, each matched pair bearing the same name, is separated pretty much at birth, growing up in disparate places – Syracuse and Ephesus. So, why turn Ephesus into New Orleans? Well, why not?

The place where the Syracusans disembark is considered to be “full of dark-working sorcerers… soul-killing witches… and libertines of sin.” 1920s New Orleans could fit that bill.

Director Scott Ellis, a 7-time Tony Award nominee, and his spectacular design team, go all out. The beautifully lit set features lovely pink buildings with wrought-iron balconies, a spiral staircase and hanging flowerpots. The eye-popping costumes are Jazz Age flappers and gangster-types. Introducing the play and marching through the street, and the audience, is a rousing, raucous Dixieland band playing old standards like “Down By the Riverside.”

The excellent cast occasionally sings or plays instruments; there’s even a nun on tuba. And of course, there are the comic shenanigans that evolve from repeated four-way mistaken identities: wrongful beatings, a potentially incestuous seduction, several arrests, and false accusations of theft, infidelity, madness and Satanic possession, to be treated by a gospel faith-healing.

It’s so slapstick and farcical to begin with, how much farther can you go? Pretty far, it turns out, in the Old Globe production. But it’s all in good fun. Never mind that Antipholus of Ephesus (here, The Big Easy) suddenly develops a Southern accent when he’s put on trial. Or that his wife is such an over-the-top Drama Queen, she throws food at him.

The hilarious antics of Glenn Howerton and Rory O’Malley, as the two Masters and their servants, keep the humor factor high. The big all-twin confrontation at the end is accomplished imaginatively.

This is one comical, frothy way to prolong your summer – outdoors, with wild antics, New Orleans jazz… even a Mardi Gras parade – with beads!

“The Comedy of Errors ” runs through September 20, on The Old Globe’s outdoor stage, in Balboa Park.