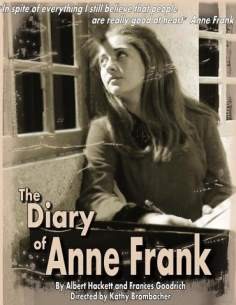 Some plays are tailor-made for a small, intimate theater. That kind of setting enhances the claustrophobic feel of “The Diary of Anne Frank,” which makes it just right for The Broadway Theatre in Vista.

Adapted in 1955 by screenwriters Frances Goodrich and Albert Hackett, from Anne’s published journal, the Pulitzer Prize-winning play is set in the cramped Amsterdam Annex, upstairs from Otto Frank’s business, where 13 year-old Anne, her parents and sister, as well as the Van Daans and their son, Peter; and the fussy dentist, Mr. Dussel, spent two years in hiding from the Nazis. They were all Jews, and they lived in terror. News of the outside world and meager supplies came from two friendly colleagues of Otto.

Director Kathy Brombacher, local favorite and founder of Moonlight Stage Productions, brings heart and authenticity to the piece – and a good deal of interesting stage business. It’s a solid production, with strong performances from Ted Leib and Crystal Davidson as Mr. and Mrs. Frank; Beverly Baker and Jim Clevenger as the Van Daans, and 15 year-old Aidan Hayek as Peter.

At the center is Rebecca Penner, who perfectly captures Anne’s restless curiosity and loquacious effervescence. With a backdrop of atrocious, unthinkable times, this is really a coming-of-age story, an unfulfilled adolescence, a creative life cut short… and the tragic tale of one young girl who, throughout the horror, somehow managed to believe in the basic goodness of people.

No one in the Annex survived, except Otto, who lived until 1980, dedicating himself to protecting Anne’s work and her memory. Like her sister, Anne died in the Bergen-Belsen concentration camp. It was 1945; she was 16 years old.

At the Broadway Theatre, the sense of menace is a palpable presence. The set and costumes are just right. Seventy years have passed, but torture and terror never seem to leave us. And every time you see the play or read the book, it makes you wonder if you, like the indomitable Anne, could still maintain your faith in humankind.

“The Diary of Anne Frank ” runs through September 27 at the Broadway Theatre in Vista.