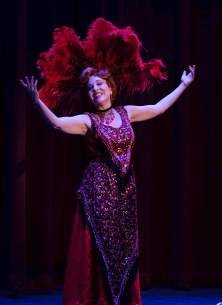 You probably know a busybody or two – but maybe not a “professional meddler.”  Dolly Levi loves to arrange things, as she sings, “like furniture and daffodils… and lives.”

She doesn’t come around that often. So if you’ve missed her, say “Hello, Dolly!” at the Welk Theatre.

Directed and choreographed by Ray Limon, the production bears some of the look, feel and moves of the Broadway original. The pared-down cast of 17 is infinitely flexible, and under Justin Gray’s baton, the four musicians manage to sound mighty – thanks to the added trumpet and reeds. The dancers, especially the men, are quite strong, with AJ Maynes and his amazing leaps a standout.

Scott Arnold and Andrew J. Koslow make a delightful duo as Cornelius and Barnaby, the wide-eyed, overworked employees of “half-a-millionaire” Horace Vandergelder. While Dolly is busy arranging a marriage for Horace – with herself as the prime candidate – the two young guys treat themselves to a day off, taking a short train-ride from under-developed Yonkers to vibrant, turn-of-the-last-century New York, where they get in trouble and fall in love.

The setting offers an opportunity for Crayola-colored costumes to enhance the wonderful score by Jerry Herman, with book by Michael Stewart, based on the Thornton Wilder play, “The Matchmaker.”

The musical won a record-breaking 10 Tony Awards in 1964, and it remains a popular perennial, but the title character is a very challenging role, which requires a powerhouse voice and an overbearing personality. Cynthia Ferrer has the vocal chops, but is a little short on sheer, unadulterated chutzpah. The only other Equity actor in the cast, playing curmudgeonly Horace, is Randy Doney, a Broadway and TV vet who isn’t as gruff or oppressive as some, but he brings heart to the role. With her mellifluous voice, Charlene Koepf sparkles in Irene Malloy’s wistful ballad, “Ribbons Down My Back.”

The women’s wigs and painted drops may be a tad cheesy, but there’s a lot to like in this lively and engaging “Dolly.”

“Hello, Dolly!” runs through November 15, at the Welk Resort Theatre in Escondido.