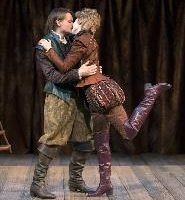 There’s nothing like feeling that you have the inside track on something.

The fictional 2014 play, “Shakespeare in Love,” takes us behind the scenes to watch the creation and evolution of “Romeo and Juliet.”

The film version, co-written by the brilliant playwright Tom Stoppard, and screenwriter Marc Norman, won the Best Picture Oscar in 1999. It had tons of inside jokes. The more you knew Shakespeare’s plays, the more you enjoyed the little tossed-off lines that would one day be famous.

The movie was often hilarious. The stage play, adapted by Lee Hall, now running at South Coast Repertory in Costa Mesa, is more fun than funny.

Some actors bellow. A few can’t be heard. The would-be Juliet, daughter of a wealthy tradesman, is in love with the stage — and the up-and-coming playwright. She winds up being Shakespeare’s muse, and the first woman to perform on an Elizabethan stage. In true Shakespearean style, she starts out dressed as a man, auditioning for the role of Romeo. Carmela Corbett is charming in the role.

The biggest shortcoming in this film-to-stage conversion is that it still feels like a screenplay, with short scenes that beg for cross-cuts, and music-and-dance transitions that further slow already-sluggish scene changes.

The whole production feels too elaborate for the proceedings. Simpler and swifter would be better.

The costumes are attractive, and aptly ornate for Queen Elizabeth, amusingly played by Elyce Mirto. Corey Brill, a UCSD alum, is delightfully droll as Shakespeare’s frenemy, Kit Marlowe, who feeds Will some of his best lines – at least in this version. As Shakespeare, Paul David Story is thoroughly likable, and has credible chemistry with his lady love.

Under Marc Masterson’s direction, the swordplay is convincing and the Irish-tinged Renaissance music is appealing, though the high-tenor vocals tend toward shrill.

At nearly 2½ hours, both play and production need trimming. But whether you love – or fear – Shakespeare, you’ll have a ball picking out the famously familiar lines.