“HAMILTON” at the Civic Theatre 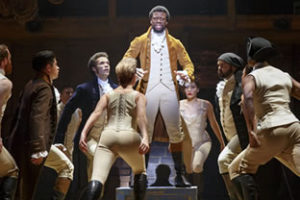 There are few things on earth that live up to their hype. “Hamilton,” the groundbreaking, blockbuster musical, actually exceeds expectations.

I was familiar with the fast-paced, word-drunk music and lyrics of the genius Lin-Manuel Miranda. But the production blew me away. It’s every bit as brilliant as the score.

The costumes, stylized moves, choreography and lighting create an unforgettable experience – stunning to look at, and simultaneously smart, funny, entertaining and informative. It brings history to throbbing, pulsing life and, while taking us on a heart-rending emotional journey, restores Alexander Hamilton to his rightful, important place in the shaping of America.

Based on the “Hamilton” doorstop-sized biography by Ron Chernow, the musical tells of the brief, manic, dazzling but stormy life of the Founding Father whose face graces the 10-dollar bill.

The first song alone, “Alexander Hamilton,” superbly captures a big chunk of the early part of the book, chronicling, in syncopation and ingenious hip hop rhymes, how Hamilton started out a poor orphan from the Caribbean, and by aggressively reading, striving, pushing and working incessantly, made his way to New York, where his stellar career began.

He fought in the Revolutionary War, became the right-hand man of George Washington, established the U.S. Mint and was America’s first Secretary of the Treasury. By age 47, he was dead – shot down in a duel by his lifelong competitor, Aaron Burr.

This San Diego stop marks the beginning of the first national tour, and it boasts a potent cast, both physically and vocally.

One of the show’s seminal questions is, ‘Who tells your story?’ For centuries, Hamilton was left in the shadows. Miranda has brought him to the forefront, and to the people. He’ll never be sidelined again.

Despite its sellout status, if there’s any way for you to see this edifying and electrifying show, leap at the chance. But go prepared: listen to the astonishing score first.