“THE COLOR OF LIGHT” at Vantage Theatre and Talent to aMuse 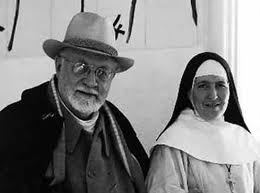 Matisse was an atheist. His muse was a nun.

At age 72, the artist hired a 21 year-old student nurse to care for him post-operatively. He was furious when he found out she was a novitiate.

But still, she enchanted him, became his spiritual love, and brought a dying man back to life. And more important, back to art.

In 1947, the nun asked him to design a stained-glass window to help raise money for her impoverished convent. Instead, he offered to design her an entire chapel. He considered it to be the masterpiece of his life.

Inspired by this intriguing true story, New York-based writer Jesse Kornbluth created his first play, “The Color of Light,” whose world premiere, here in San Diego, is produced by Vantage Theatre and Talent to aMuse, at the Tenth Avenue Arts Center.

Fifty percent of the well-crafted dialogue comprises direct quotes from the artist and the nun. We learn a great deal about Matisse – his love of color and light, his inner torment, his reasons for painting. But there’s only a passing mention of the wife he “sent away.”

We meet Pablo Picasso, Matisse’s friendly competitor, amusingly portrayed by James Steinberg. Their interactions are delightful. But two additional characters — the architect-priest and the Mother Superior — are unnecessary, and disrupt the flow of the piece.

Except for Picasso’s two spirited visits, the play is about this triad – the nun, the caregiver and the artist. And that’s where the focus should stay. Those three performances — by Cecily Keppel, Bobbie Helland, and O.P. Hadlock — are quite compelling.

The production gets off to a slow start, with a sluggish pace, too many short scenes and not enough action or conflict. This is underscored by the frequent and pointless moving of furniture. Momentum picks up significantly in the second act.

Director Robert Salerno shines best in his projections of Matisse’s creations – the paintings, the cutouts, and especially the gorgeous Chapel at Vence, which should be the final image we see.

The play is a good beginning. With judicious cuts, it could have legs. It certainly has art.