“THE LAST WIFE” at Cygnet Theatre 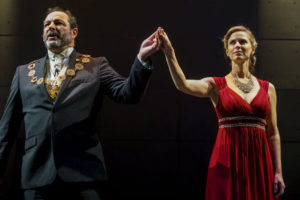 Kate Hennig was kind of prescient when she wrote “The Last Wife” (which premiered in 2015). It’s about a womanizing tyrant, a volatile, petulant, childish bully of a leader who rules his country and his castle with an iron fist.

But in this case, his titular spouse is smart, ambitious, assertive, and hellbent on having equality and authority.

The power couple of the play is not contemporary: they’re Henry VIII and his sixth and final wife, Katherine Parr (he was her third husband; they were married from 1543-1547). But the resonance with modern-day America is uncanny.

The brutality of Henry is legendary; he had a penchant for beheading the wives he tired of, or those who couldn’t bear him sons. Katherine is the only one who outlived him – but not for long. She died in childbirth, bearing a daughter by another man – Henry’s former brother-in-law, Thomas Seymour. Though he was her long-time lover (a very risky business while she was Queen), Seymour wound up betraying her by dallying with her stepdaughter, a treasonous act which cost him his head.

That step-daughter was Elizabeth (AKA Bess, later to become Queen Elizabeth I). Her half-sister Mary also appears (she’ll briefly serve as Queen, before Elizabeth ascends the throne).

One of Katherine’s objectives was to convince Henry to give his two estranged daughters rights of succession. Of course, they were preceded by their young half-brother, Eddie (Edward VI), who was King for a short time (from age 10-16).

All this politics and palace intrigue happened in 16th century England. But Hennig makes it fresh, timely and feminist. Parr was, in addition to serving as Regent, the first woman to publish a book in English in her own name.

She accomplished a great deal, but it came with a cost. Henry could be abusive and violent (he tries to strangle her twice during the course of the play; kudos to fight director George Yé).

Manny Fernandes gives a robust and nuanced performance as King Henry, a showy, highly emotional role. Allison Spratt Pearce has a more low-key, subtle character to play in Katherine who, in this version of her story, wheels and deals primarily for the benefit of the country – and the women of the family.

She clashes repeatedly with her step-daughter  Mary, a dour, resentful young woman, and a role that doesn’t give Cashae Monya more than one note to play – though she plays it well.

Katherine becomes teacher and mother to Henry’s two younger children: Bess (portrayed by a very solid and self-possessed 14 year old, Kylie Acuña) and Eddie (adorable and charismatic 11 year-old Giovanni Cozic on the night of review; he alternates in the role with 9 year-old Bobby Chiu).

The head-to-head confrontations between Henry and Katherine are reminiscent of those in James Goldman’s “The Lion in Winter,” set in the 12th century, where the smart, quippy (but infinitely more nasty, spiteful and manipulative) mates are another Henry (II) and his tempestuous wife, Eleanor of Aquitaine, whom he exiled and imprisoned for 16 years.

Ah, the Tudors… a charming family through the generations. (Elizabeth I was the last of the line).

With her sharp contemporary dialogue, Hennig slips in a good deal of history and a mountain of woman power. The nearly three hours fairly fly by, so tautly timed, expertly directed and admirably acted is this production.

It’s also beautiful in its simplicity, with attractive costumes (Veronica Murphy), appealing sound and music (Kevin Anthenill) and effective lighting (Chris Rynne) that efficiently delineates scenes without the need to rearrange the  furniture. The set (Sean Fanning) features sleek, gray walls and floors that could be ancient stone or futuristic metal.  Equally timeless:  the struggles of intelligent, imposing females.

Whether you like history – or herstory , autocrats or irrepressible women, entertaining or thought-provoking theater , you’ll want to spend an evening with “The Last Wife.”