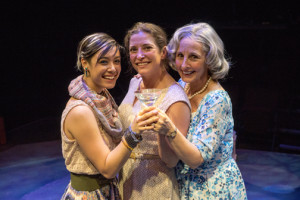 Freud wasn’t the first to ask the question, but he may be the most quoted: What do women want?

Eighty years later, two-time Pulitzer Prize finalist Gina Gionfriddo is confronting the same question – with a feminine spin, but not much more of a definitive answer.

“Rapture, Blister, Burn,” her 2012 comic drama, gives us four females, three generations, and tons of conundrums, like ‘What constitutes a satisfying and fulfilling life?’

Is it a mundane marriage, as a hausfrau with kids? Is it a wildly successful career with no social/sexual encumbrances? Or do all women just want it all – high-profile job, passionate partner and talented offspring?

Feminism has come in several waves. So have horror/slasher films, Gionfriddo points out. Not all have resulted in positive outcomes for women. Young twentysomethings like Avery, who don’t even consider themselves ‘feminists,’ favor casual hookups, unlike their grandmothers, who thought that having a man completes your life (this show’s grandma-type happens to have a successful, unmarried daughter).

Humor and history, philosophy, passion and existential quandaries abound in “Rapture, Blister, Burn,” as good a description of relationship as any.

Incredibly, two former best friends are fighting over him – even as they want to swap lives. The homemaker mom wants freedom; the globe-hopping academic craves family stability. They both get their wish, with less than gratifying results.

Though it sometimes has the feel of a late-night dormitory bull-session, the play is smart, funny, incisive and insightful.

At the San Diego Rep, director Sam Woodhouse stages the play arena-style, with the audience surrounding the action, so we’re all a part of the discussion, which in truth, we are.

The design is backyard festive, offering four potential exits to something labeled ‘Home Sweet Home.’ The action is buoyant and the cast is delightful, with a special shoutout to Jennifer Paredes as the adorable, terrifically costumed Avery, representing the young, sometimes perverse and also confused generation.

By putting all kinds of options into the sassy mouths of colorful and compelling characters, Gionfriddo is out to get you thinking and talking. And boy, does she succeed.