“JESUS HATES ME” at ion theatre 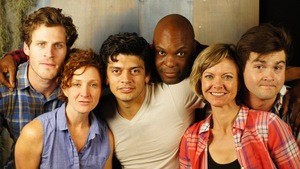 It’s not just the S-curves and sand-traps you have to watch out for at the Blood of the Lamb Miniature Golf Course in small-town Texas. It’s wacko Moms and failed suicides and Christ staring down from the cross at the 17th hole.

This is oversized existential angst, Texas style. That means plenty of drawl, booze and redneck behavior (violence not excluded). It’s profane – even when discussing the sacred.

The town is something of a black hole. Everyone is miserable and trapped, bogged down by guilt or responsibility, ignorance or fear. Or some combination of the above. People talk about leaving, but no one’s going anywhere.

The Man Most Likely to Escape is Ethan (hunky, adorable and thoroughly credible Connor Sullivan). The former football star seriously injured his knee in a high school game, and lost his chance at an athletic scholarship. Now 25, he’s been offered a chance by his cousin in Colorado – not exactly an ideal job, but it is an exit ticket: teaching skiing and horseback riding at a gay resort (he has no experience whatsoever in either sport, and he’s unequivocally straight). But he figures that maybe he can earn enough cash to go back to school. If he can just go.

Ethan spends his free time reading Camus and Nietzsche, and railing against God (hence, the title), even as he helps Annie, his nutjob religious zealot of a mother, at the mini-golf course behind their beat-up Airstream trailer (nicely detailed set by Claudio Raygoza, who also designed the sound and lighting and, with his partner Glenn Paris, fleetly and effectively co-directed). The course is populated with manikins, stolen by Annie from Walmart, enacting scenes from the Bible. The head of John the Baptist makes several (severed) appearances. Annie (deliciously nutty Lisel Gorell-Getz) cradles the head and talks to the manikins to maintain what little there is of her sanity (it doesn’t help).

Annie’s fanaticism extends to her son, with whom she has a gravely unhealthy, co-dependent relationship; she keeps him close through guilt-trips, manic outbursts and run-ins with the law, and full-tilt manipulation. One character says she’s “Medea with better beauty products.”

The rest of the motley residents include acerbic, no-nonsense bar owner Lizzy (excellent, grounded Dana Fares), Ethan’s high school squeeze, who’s still waiting for him to come around; her angry, disappointed brother Georgie (weird/scary Charlie Gange), who’s forced to speak through an electronic-sounding artificial larynx because of his botched attempt at self-destruction; good-hearted doper Trane (Lawrence Brown, superb), the only black deputy sheriff in the entire state of Texas (“They tolerate me as a deputy; I run for sheriff, they pull out the hood and sheets”); and Boone (hilarious Richard Johnson), the oversexed, possibly mentally challenged loser, who gets the best comic lines and business (killer fight choreography by George Yé).

Everyone here is hobbled in one way or another, victims of poor choices and worse luck. As Annie (Ethan’s mom) puts it, “Life is broken beyond repair.” Ethan blames everything on Jesus, claiming “God plays his own special brand of whack-a-mole … He won’t be happy till he kills us all.”

The others carry their bitterness and cynicism in different directions – drowning their disappointment in weed or alcohol or sexual wantonness. They’re all trying to wring a droplet of meaning from their parched, shrunken existence.

Through their failures and foibles, Lemon makes them wretched and pitiable – and endlessly, helplessly funny. It’s quite the dramatic challenge to mix faith and fun, catastrophe and comedy, emotional crises with entertainment. Lemon squeezes all the juice out of his characters and their sorrowful-if-they-weren’t-side-splitting lives.