“CONSTELLATIONS” at The Old Globe 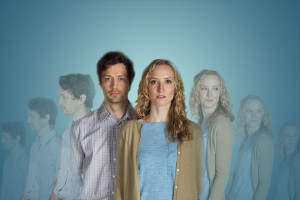 How many times have you re-played a conversation in your mind, wishing you’d responded differently, and that the outcome had been different? How often have you lamented the paths not taken?

In Nick Payne’s “Constellations,” we watch a couple replay multiple scenes and possibilities in their rocky relationship, illustrating the theory of a ”quantum multiverse,” in which “at any given moment, several outcomes can co-exist simultaneously.”

That’s how Marianne, a mercurial cosmologist, describes it to Roland, a mild-mannered beekeeper. We see their first meeting over and over again, just like the unforgettable mini-play, “Sure Thing,” in the wonderful 1993 David Ives compilation, “All in the Timing.” The same lines are said in different ways, with potentially vastly different outcomes.

Payne’s 2012, 65-minute play takes place outside the time/space continuum, nimbly pivoting among the past, present and future. Depicted in both a microcosm and a macrocosm, two smart social incompetents, stumbling toward love, are totally awkward and completely relatable.

At The Old Globe, Rick Seer directs with snappy sensitivity. But it seems like we see more of the challenges to the relationship – uncertainty, infidelity, mortality – than moments of affection or joy. Though staged in the intimate White Theatre, the characters are almost always a distance apart. But perhaps that underscores the difficulty of achieving true closeness and communication.

Marianne is the showier role, and Victoria Frings is marvelous – a thousand quicksilver emotions playing on her malleable face. Christian Coulson is more still and less varying, but he’s an appealing presence, and he sparkles in his flashes of anger, frustration or resentment.

The set and lighting designers have created a hexagonal space in the round, a reference to the shape of honeycombs and molecules. Suspended blue lights bounce off black reflective walls, giving the illusion of infinite galaxies.

Though quite a bit of theoretical physics is bandied about, you never feel totally left behind. The playful, if scholarly, structure entwines a fairly linear love story, which propels you through the tough spots, and assures that you’ll be seduced by the characters, emotions and outcome.

And yet, the bigger questions the play poses may nag at you: Why are we here? And which ‘here’ are we actually in? Is there really any free will, or are we all just seemingly random sub-atomic particles?