“PUFFS” from The Eastern 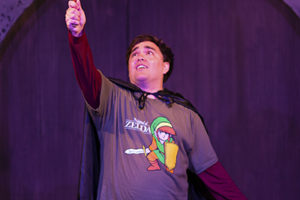 VENUE: The Eastern at PowPAC

You’d have to be living under a very large rock, or in a very dark cave, not to know anything about the Boy Wizard who was The Chosen One at a certain school of witchcraft and wizardry.

Now, along comes “Puffs: Seven Increasingly Eventful Years at a Certain School of Magic and Magic,” that is to say, Male Magic and Female Magic, which is about all the other kids at that school – the ones who weren’t brave or smart or malicious.

The wacky comedy, by Matt Cox, is winding up a 3½ year run Off Broadway, and a new local theater company, The Eastern, is introducing itself with the regional premiere of the show.

The Puffs are the least popular kids in wizard school, the ones not destined to be special or save the world. You might call them misfits, or losers. But over the course of their 7-year education, they make friends, get kissed, grow up, and suffer numerous tribulations, along with a few minor triumphs. They know who they are; their aspiration is just to be Number 3 out of 4. But they’re nice and loyal, and prone to group hugs.

Of course, the more you know about the Potter series – and there is a character named Harry Potter here – the more you get the innumerable wink-nudge jokes, references and spoofy sendups.

But even if you only know the basics, you’ll appreciate the expertly-timed physical comedy and the versatility of the energetic 15-member cast, who play myriad roles, good guys and baddies, even the bald-capped nose-taped Dark Lord.

The direction, by Justin Allen Slagle, is crisp and clever, the multi-door gray castle is aptly ominous, the costumes are cute (but in serious need of an ironing); and the props are terrific – working wands and all.

There’s a good deal of silliness and fear-screaming. But there are also tender and even tear-jerking moments, especially if you were one of those bullied, overlooked or unchosen ones in your own not-so-magical high school.

What’s real wizardry is a fledgling semi-professional company snagging the regional premiere of this show, an auspicious beginning that might just put a spell on you.