“A WALK IN THE WOODS” at North Coast Repertory Theatre 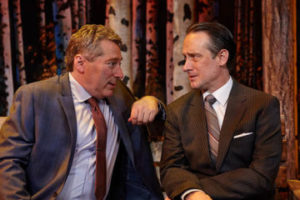 The only path to a serious discussion is frivolity.

These men may have the fate of the world in their hands, but Andrey forces John to talk about Mickey Mouse and Babe Ruth. He wants to be friends, not enemies or adversaries. He’s trying to understand the culture of the person on the other side of the table, which is one positive message of the play.

Still, having been on the job for many years, Andrey is riddled with cynicism. It’s Blessing’s laugh-out-loud humor that keeps us from falling into the same pit of hopelessness.

After all, when arms negotiations began, there were only hundreds of nuclear warheads. After decades of talks and scores of treaties, there are more than ten thousand.

The weapons-makers, says Andrey, are a lot faster than the dealmakers. And that’s just how both governments want it, so they can preserve their power.

John is younger, newer, more idealistic. He believes that negotiations can lead to an amicable agreement that will save humankind.

The play might underscore this hope, ending as it does in spring, after a year of meetings in the same attractive Swiss woods, on the same lonely bench.

Though the piece was written more than 30 years ago, it feels unnervingly relevant, since not much has changed over the decades. Russia and the U.S. still possess 90% of the world’s nuclear weaponry, with other countries joining the club all the time.

Serious subject matter, indeed. But at North Coast Repertory Theatre, Richard Baird has directed with a light touch, underscoring the humor and drawing us deep into the characters as well as the political quagmire. He’s blessed with consummate actors in exceptional form: North Coast Rep artistic director David Ellenstein, obviously relishing inhabiting multi-layered, entertaining Andrey; and J. Todd Adams, his perfect foil, who grows into his own emotional intensity.

The production is riveting. It makes you listen, laugh and think – a theatrical triple-whammy.