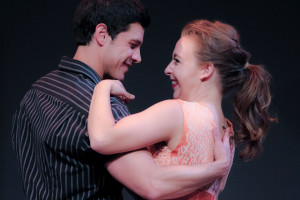 It’s no picnic living in a small town, especially in mid-century Middle America, with its strict conventions and constraints, especially for women. So, when a hunky, handsome drifter struts into town and takes his shirt off to do some yardwork, the whole place holds its collective breath.

William Inge was one of the great, naturalistic chroniclers of simple folk, reminiscent of his youth in Independence, Kansas. He won the Pulitzer Prize in 1953 for “Picnic,” and the drama is getting an excellent airing from the Oceanside Theatre Company.

We see two modest Kansas clapboard houses, side-by-side, filled with disappointed and unsatisfied women. Depression, repression and despair hang in the air like a storm cloud. The two single matriarchs regret having missed their chances, or made poor choices. The boarder, a self-proclaimed “old maid schoolteacher,” becomes increasingly desperate.

And there are the two young sisters – Madge, the vapid but discontented town beauty, and Millie, a brainy tomboy with Big Plans to be a writer in New York. Both hear that mournful train whistle as an invitation to a life other than their own.

Then, one Labor Day, Hal Carter swaggers in, with his six-pack abs, brazen sexuality and bad boy machismo. He’s nice to all the ladies, but he has a special eye for Madge, who sees him as everything she dreams of. Her summer boyfriend, nice-but-bland Alan, doesn’t excite her. But Hal does.

The older women cluck, the middle-aged teacher clings frantically to her beau. Wishes are ultimately granted, but there are no happy endings here. The play offers a grim view of romance and marital satisfaction, not to mention the powers and limitations of beauty – and brains.

Oceanside’s new artistic director, Ted Leib, does an outstanding job with an excellent cast. We feel the heat, and the longing. The set and costumes capture the time and place perfectly. It’s an earlier era, but the hunger and yearning, so credibly conveyed, are timeless.