“COME BACK TO THE FIVE AND DIME, JIMMY DEAN” at Vista’s Broadway Theatre 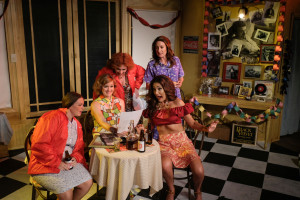 Denial and self-delusion run deep. But “Come Back to the Five and Dime, Jimmy Dean, Jimmy Dean,” a 1956 drama by Ed Graczyk, is getting a buoyant revival at Vista’s Broadway Theatre.

The action is set in two timeframes in a tiny West Texas town, not far from Marfa, where “Giant” was filmed. That was the last movie of heartthrob and cult icon James Dean.

In 1955, a James Dean Fan Club was thriving in this little town, replete with disciples, rituals and a ceremonial song. Twenty years later, the members have reconvened to mark the anniversary of Dean’s tragic death-by-auto-accident at age 24.

It’s a rowdy reunion, where masks are ripped off, dark truths are revealed and long-held beliefs are challenged. Amid a boatload of Bible-thumping and beer-drinking, we glimpse flashbacks that show how the bravado of youth has given way to the disappointment of looming middle age. We see the narrow-mindedness, bigotry and homophobia of a hidebound town, and the lengths that every one of these characters will go to, to get noticed.

At the center is Mona, the last holdout in James Dean idolatry. Not only does she maintain a shrine to her idol in the Five and Dime where she works; not only does she make an annual pilgrimage to Marfa to visit the ruins of the “Giant” set; but she insists that, while she was an extra in the film, James Dean chose her to father his only son, whom she named Jimmy Dean.

The price of self-deception and unrealistic dreams is steep. The mid-century constraints suffocate girls, women and boys who are ‘different.’ How each of these eccentrics copes – or doesn’t – forms a fascinating portrait of small-town life.

Director Kathy Brombacher has marshalled an excellent ensemble. Under her expert guidance, each skilled and committed actor carves out a flawed and credible character, in spite of the sometimes strained credibility of the script.

The 1982 film featured an all-star cast. These less-famous actors manage to bring a particular place and time to vibrant, pulsating, gut-wrenching life.