“SKELETON CREW” at The Old Globe 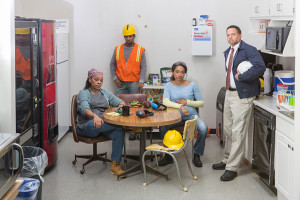 Here’s a startling statistic: In 1950, one in every six Americans worked, either directly or indirectly, for the auto industry. Then came increasing automation, the social/political cataclysm of the late ‘60s, the oil crises and the unrelenting rise of Japanese carmakers.  And of course, the Great Recession of 2008, when two of the country’s Big Three automakers declared bankruptcy and had to be bailed out by the federal government.

It is against this backdrop, and resting on this fraught and unstable history, that a Detroit native, playwright Dominque Morriseau, set her play, “Skeleton Crew,” which began as a reading in the 2014 New Voices Festival at The Old Globe and has returned in a full-bore, highly intense and occasionally amusing, unequivocally outstanding production.

All the action takes place “somewhere around the year 2008,” in the shabby, fluorescent-lit break room of a stamping plant, one of the only remaining car factories. (This play is one part of Morriseau’s ‘Detroit Trilogy’). Not only the plant is in peril, but also a city and a way of life.

This little “family” is struggling to avert the looming cataclysm: the rumor is that their plant, like so many others in town, will soon be shutting down, and they’ll be out of work, benefits and future plans.

Reggie knows exactly what’s in the cards. He confides in Faye, the union (UAW) rep, who’s been like a second mother to him (Faye, who helped raise him, was deeply in love with Reggie’s late mother). As a microcosmic image of labor and management, they try to balance how to deal with the encroaching closure – and how and when to let the others know. Balance, drawing a line and stepping over it, are recurrent themes.

The play spends a good deal of time in the first act introducing the characters, their relationships and a bit of their backstories. It feels repetitive at times.

Things really start to pop and crackle in Act 2. The writing is so crisp and rhythmic, the language and dialect so rich and the performances so exceptional, that we’re swept along, hearts aching and stomachs clenching for these folks, and the thousands or workers like them.

In this time of abject feelings of disillusion and marginalization in the working and middle class, the play feels extremely timely.

These are all flawed people, but they’re good people at heart, caught in the onrush of time and technology.

Delicia Turner Sonnenberg, founding artistic director of Moxie Theatre (which is co-presenting this production), a beloved and esteemed director about town, is making her Old Globe directing debut. She does a superb job, with a magnificent cast, delving deep into character and making excellent use of the White Theatre’s arena stage.

After almost 2 ½ hours, we really feel like we know these folks, and we feel their pain:  Reggie, contemplating which member of his ‘family’ to lay off; and the others, facing the terror of the unknown, when this is all they know, all they’ve done, a skill-set they feel proud of and excel at.

Faye has been at the plant for 29 years. She’s hoping to hold on, so she can get the enhanced benefits earned at the magic 30. Young, single, pregnant Shanita (played as an adorable, arch-backed idealist by Rachel Nicks) has gotten a job offer at a copy center, but she can’t imagine what she’d do there. She depends on the “music’ of the plant clamor to calm and lull her.

Dez (played by Amari Cheatom with an appealing edginess) is the “bad boy” of the bunch, bending (and breaking) the rules, endlessly flirting with Shanita, making plans to open his own body shop, and carrying a gun because he can’t survive without it on these mean streets.

The intensity of emotions and interactions, especially in the second act, grabs us by the lump-constricted throat and won’t let go. There is a dénouement, of sorts, but true to life, many questions about an uncertain future remain.

The production values are first-rate. Tim Mackabee’s set features a battered sofa and a few worn, torn vinyl chairs, sprawled around a formica table. There are lockers below the counters (hiding personal secrets), a microwave and mini fridge, and Reggie’s ubiquitous signs that remind Faye not to smoke (she’s already made it through one cancer). The lighting (Sherrice Mojgani) and sound (Lindsay Jones) are sharp, and Jennifer Brawn Gittings has done her usual meticulous work on the costumes.

Everything here hinges on ‘If.’ As the shrewd survivor Faye reminds them, “If ‘Ifs’ were fifths, we’d all be drunk.” That’s one way to face the onslaught.