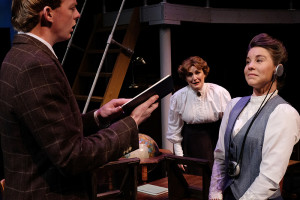 The mathematicians at NASA in the 1960s, as depicted in the popular 2016  film, “Hidden Figures,” weren’t the first women to be called “computers.”

Much earlier, at the turn of the 20th century, female astronomers were “computers” confined to the unseen ‘back rooms’ of the Harvard College Observatory (HCO), where they toiled away under an autocratic male supervisor. In fact, Professor Edward C. Pickering’s female work-group was even called “Pickering’s Harem.”

But one woman, and her feisty cohorts, refused to remain in the background. And it turned out that, on her own (after-hours) time, Henrietta Swan Leavitt discovered how to measure stellar distances, thereby altering the course of astronomy and changing our conception of the universe.

“Silent Sky,” a 2011 play by Lauren Gunderson (the most-produced living playwright in the U.S. in 2016-2017, according to American Theatre magazine), portrays a big chunk of the quiet but trailblazing life of Leavitt (1868-1921), with a few dramatic embellishments.

The drama – with comic moments – is currently getting a sparkling, thought-provoking local premiere at Lamb’s Players Theatre

Leavitt, a Phi Beta Kappa graduate of Radcliffe College, only discovered astronomy in her senior year, but it lit a lifelong fire in her life, and she went on to work (for a pittance) at  the HCO, joining other groundbreakers: Annie Jump Cannon (1863-1941) and Williamina Fleming (1857-1911).

The Scottish-born Fleming, as delightfully portrayed by Deborah Gilmour Smyth, was hearty and welcoming. Cannon (deftly played by a supercilious Cynthia Gerber) was more stern, intense and standoffish, but gradually came to realize the brilliance of her new charge – and even came into her own as a champion of women’s rights, as a pants-wearing Suffragette.

Most of the plot seems to be historically accurate. The primary liberties Gunderson takes are (inexplicably) in the name of Henriett’s sister. Here it’s the warm, supportive/resentful Wisconsin homebody, Margaret, effectively embodied by Catie Grady; in fact, her sister’s name was Mira.

And then there’s the fictional astronomer, assistant to Pickering, who stands in for the patriarchy, doubting not only that women can do the work, and supporting the notion that they can only analyze the data, not  collect it (they weren’t permitted to use the telescopes at HCO), but he also agreed with the then-accepted notion that there were no other galaxies but ours – which Henrietta’s work ultimately disproved. (Her discoveries, which came to be known as Leavitt’s Law, concern how to measure stellar distances, specifically revealed in the period-luminosity relationship of Cepheid stars. This allowed astronomers, including Edwin Hubbell, to measure the distance between Earth and faraway galaxies).

Conveniently, Shaw comes to recognize Henrietta’s genius – and even acknowledge that it surpasses his own. So, he becomes the love interest that adds another barrier to the impassioned astronomer’s addiction to her work: man and travel vs. research. She also has to deal with her hearing loss (sustained as an adult. Interestingly, though it doesn’t appear in the play, Annie Cannon also had a significant hearing loss, from an early childhood illness); and a sickly father at home in Wisconsin; and her own diminishing health (she died of cancer at age 53, but the source of her pain is never revealed in the drama).

Although Shaw serves as a dramatic device, Brian Mackey makes his bumbling awkwardness and fumbling honest hugely endearing. And as an indication that not even men were in full control of their lives at the time, he has a father who not only dictated the course of his career, but also when and whom he should marry.

Director Robert Smyth nimbly and adroitly juggles these characters and issues (including the religion vs. science discussions between Henrietta and her sister which the playwright has them conclude are interdependent).

At the center of it all, Rachael Van Wormer brings a wonderful, awe-struck ebullience to Henrietta, and makes us care for her dogged commitment to her field, flouting and fighting the devaluation of women in it. She even makes us listen harder, to more fully understand what it actually was that she found and documented. Sadly, she was offered the Nobel Prize too late; the letter came three years after her death, and the award is never given posthumously.

Also helping to bring the story to vibrant, pulsing life is the majestic set created by the ubiquitous, mega-talented scenic designer Sean Fanning: a towering, wood-framed dome, reminiscent of an observatory and the earth’s shell, filled with stars (some twinkling, some traveling across the sky, thanks to projections by Michael McKeon). The lighting (Nathan Peirson) helps to transport us emotionally, and on the more earthbound plane, the costumes (Jemima Dutra) efficiently establish a buttoned-up Edwardian sensibility.

It’s high time these female trailblazers are retrieved from the footnotes of history and placed squarely in the spotlight.

So, all hail Gunderson, Lamb’s – and our (beleaguered but) enlightened era.