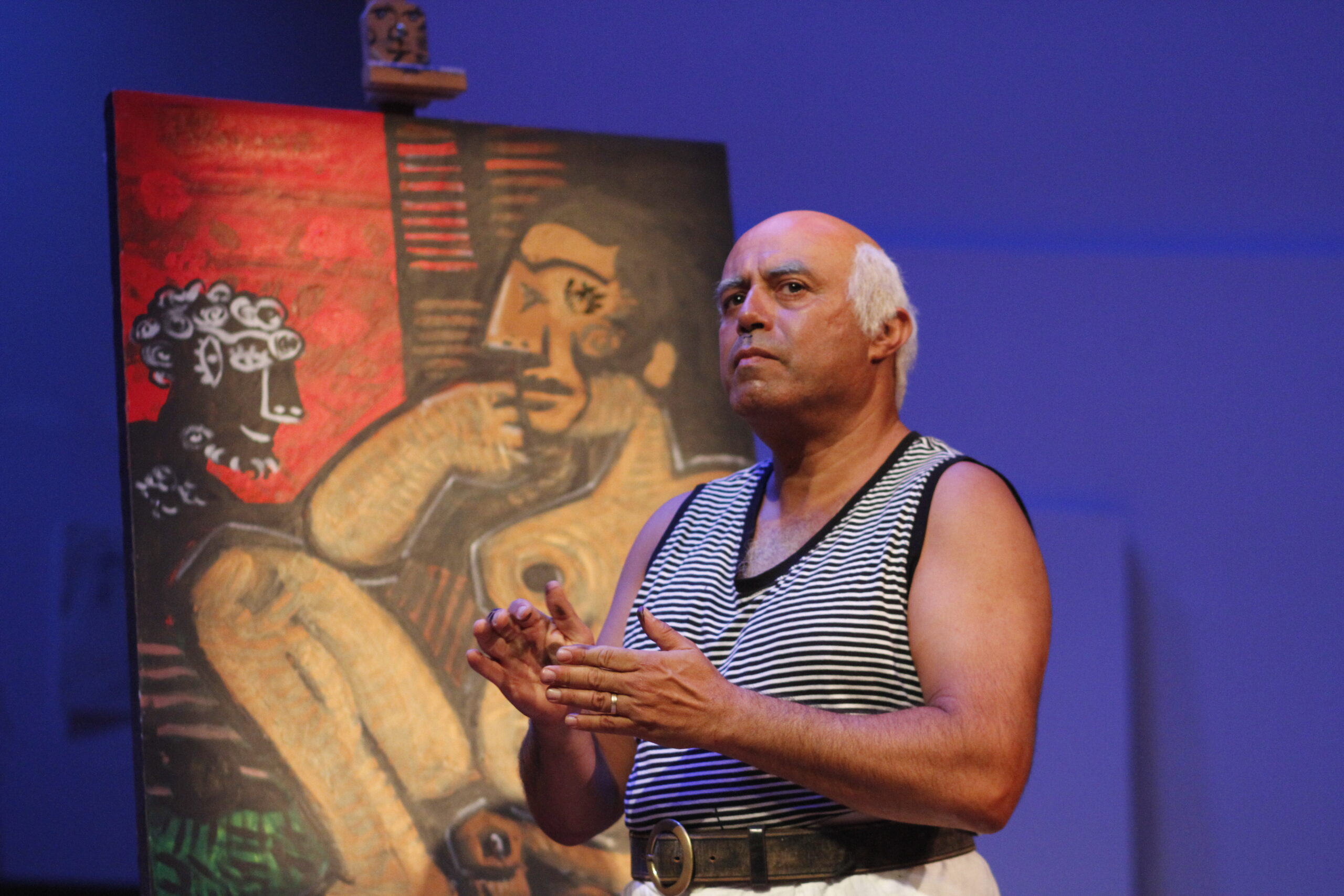 You are hereby invited to spend “A Weekend with Pablo Picasso.”

Okay, maybe not a whole weekend… but the length of a feature film about a weekend.

The solo theater piece of the same name, a tour de force written and performed by Herbert Sigüenza, premiered in 2010 at the San Diego Repertory Theatre (which commissioned it), was reprised there in 2013. Last year, it was a smash-hit at another San Diego theater (New Village Arts), and in the interim, it toured a number of U.S. cities to sellout performances.

Now, “A Weekend with Pablo Picasso” is being filmed for all the world to see.

Sigüenza, of Salvadoran descent, is perhaps best known as a founding member of the Latinx political comedy triumvirate, Culture Clash. He has spent his pandemic-time writing two recurring shows for San Diego theaters: the interactive “Beachtown” at San Diego REP and for the La Jolla Playhouse, the multimedia “Totally Fake Latino News with Culture Clash,” created and performed with his co-founding compañeros, Richard Montoya and Ric Salinas.

For the film adaptation, Sigüenza, for the past several years the REP’s Playwright-in-Residence, is co-creating with the REP’s Associate Artistic Director, Todd Salovey (who has directed all incarnations of the stage play) and internationally recognized, Emmy Award-winning filmmaker Tim Powell, currently a professor at San Diego State University.

“We have long wanted to make this into a film,” Woodhouse says.”Both artists —Picasso and Sigüenza — represent the kind of political/social/boundary-smashing artist that we love to feature in our work .”

Sigüenza is, in fact, the perfect person for the role. The chameleon actor, comic and clown also happens to be an art school graduate. And he has the ideal mien and demeanor to re-create the many looks of the Master: the white-rimmed bald head, the striped shirt, the baggy pants, the bare chest, the red rubber nose. In character, he is a whirlwind of activity, antics and philosophical musings. He eats, he paints, he feigns a bullfight.

The setting is Picasso’s studio in the south of France. It’s 1957 and he’s 76 years old. Still spry and very active (Sigüenza just keeps growing into the role; he’s now 61, and plans to perform it live for at least another ten years), we catch him in the midst of a (fictional) last-minute, high-profile commission.

It’s Friday afternoon, and he’s just found out that a wealthy American collector wants six paintings and three vases — to be completed in one weekend. The ‘audience’ he’s directly addressing (we, the onlookers) is a group of art students sent by his agent to make sure the job gets done.

Did I mention that Sigüenza actually uses his extensive visual arts background to complete several paintings during the course of the story? When the show was presented live, the paintings would be auctioned off at the end to benefit the theater or its programs. Some of the magic of watching his rapid artistic creations may be lost, or underappreciated, in a film version where, of course, anything is possible.

“We’ve changed the piece very little,” Sigüenza reports. “It will be an intimate film. We’re filming four days on the Lyceum stage [at the REP[, on a more realistic set, and one day outside in Escondido for some garden/courtyard scenes.

“The acting is toned down for film,” Sigüenza continues, “which makes it more intimate. The play is at its apex, so I’m glad we’re capturing it at this time. I’ve grown into the part, and I’m a better actor now than when I started it in 2010. I’m very excited about this film version that can be seen worldwide.”

About 75% of the text that Sigüenza created is taken from the actual words of Picasso. So we hear his impassioned views on love, beauty, war, death, eternity, fame, family, inspiration, aging, creativity and of course, art. He dances, he sculpts, he shares secrets, he clowns around (Pablo was a self-proclaimed clown).

Picasso was a revolutionary, a brilliant, funny, arrogant, petulant, political rockstar. In this piece, his obsession to create is palpable and infectious.

“I create art,” he famously said, “so I can wash the dust of daily life off my soul.” And, in response to the criticisms of his abstractions and distortions, “The world today does not make sense; why should I paint pictures that do?”

Prepare to be awed and inspired — by the performance, the performer and the extraordinary source.