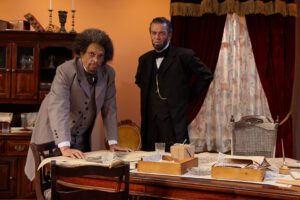 In these perilous times, in the throes of a pandemic when all theater doors are shut, filmed productions are emerging as the next best thing to being there. And yet…

In Richard Hellesen’s ”Necessary Sacrifices,” based on two documented meetings between Abraham Lincoln and Frederick Douglass, we’re supposed to be flies on the wall, observing the spirited (imagined) conversations. But while that’s intended to bring us close to these two great men, the piece plays as more diorama than compelling drama.

Much of the dense text is taken from the men’s public orations and writings (Douglass was especially prolific in print), and the play often feels static and didactic, repetitive and dry.

The issues are certainly pertinent today: racism, inequality, the divisiveness of the country and the terrible treatment of Blacks.

The two towering statesmen couldn’t be more different: one white, homespun and folksy, prone to jocularity; the other Black, rather stiff, hellbent on being taken seriously (Douglass never smiled in a photo — and he was the most photographed man in the 19th century — because he wanted to be sure to dispel the myth of the ‘happy slave’).

But by far the most captivating moments in the play are the personal ones, when the men reveal details about their wives and children, and they realize, despite their vast differences of opinion on subjects like abolition, how much they have in common: loss of a child (one age 10, one 11); a hardscrabble upbringing (Lincoln in poverty; Douglass in slavery); the loneliness of the lifestyle each has chosen; and the sacrifices (especially vis à vis family) required by devoting one’s life to a cause.

We get bogged down in the names, locations and war details and each man’s view of the Civil War and its potential aftermath. Yet, when they speak of peace, politics and moral courage, we are riveted.

Douglass felt that Lincoln was “tardy, hesitating and vacillating” about signing the Emancipation Proclamation, and he urges the president to give earnest consideration to the status of freed slaves after the war. Lincoln fears losing an upcoming election, and worries that moving too fast will alienate the electorate or even Union soldiers. Topical resonances abound.

The framing device, which is a bit clunky, has Douglass come downstage to set up the situation, how he strode into the president’s office in the summer of 1863 without an appointment, loaded for bear. At the top of Act 2, he tells us it’s a year later, August 1864. At one point, as Douglass stays downstage listening and commenting, we watch Lincoln upstage delivering the Gettysburg Address.

Filmed on the stage at North Coast Rep, the performances are convincing (though they did get considerably, uncomfortably closer than ‘6-foot physical distancing’ at times).

Ray Chambers (an alumnus and now head of acting at The Old Globe/USD Shiley Graduate Theatre Program) is affable and avuncular as Lincoln (though his beard is a less manicured).

As the orator and preacher Douglass, Hawthorne James has the requisite dignity, stone-faced solemnity and formality (Douglass insists on calling Lincoln “Excellency”).

Though both are reluctant to back down from their staunch positions, they ultimately realize that compromise is necessary and in the end, no one will get exactly what he wants. But they do come away friends.

Somewhat ironic that the 2012 play was commissioned by Ford’s Theatre in Washington, D.C. (site of Lincoln’s assassination in 1865, at age 56. Douglass would outlive him by 30 years and die at age 77).

Now, North Coast Repertory Theatre is presenting the West coast premiere. The filming (cinematography and editing by Aaron Rumley) is well done, but there is that nagging distancing effect, perhaps more due to the play than the production, which is directed by Peter Ellenstein (professionally well-regarded brother of NCRT artistic director, David Ellenstein).

The set (Marty Burnett, in his 199th design at the theater) is serviceable. This is no elaborate Oval Office. Lincoln sits at the table where his contentious Cabinet meets. Douglass tries out his chair.

In case you’re fuzzy on your American history, this is not the Douglass of the famous Lincoln-Douglas debates. That spectacle, also known as The Great Debates of 1858, comprised a series of seven confrontations between Abraham Lincoln, the Republican Party candidate for the U.S. Senate from Illinois, and incumbent Democratic Senator Stephen Douglas. Lincoln lost the debates, but won the war, so to speak. The published texts of his debate performance helped him snag the Republican Party nomination for president in 1860.

If you like to take the long view of history, and consider how directly the past informs the present, not to mention seeing what great statesmen look like, you’ll enjoy this production. And besides, with no live theater available, what else have you got to do?