“THE NICETIES” filmed by Moxie Theatre 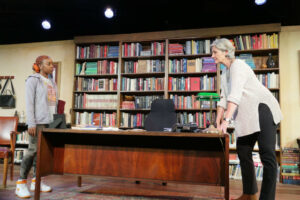 The setup is inherently combustible. The subject is the role of race in American history.

From the get-go, “The Niceties” is fraught with inequities: there’s a power differential, a generational divide and a racial disparity.

The debaters (combatants?) are smart, feminist women in an elite liberal arts college. The distinguished professor is white; the ambitious, activist student is Black.

It all begins with the student’s term paper, which posits that a successful American Revolution was only possible because of slavery. The professor calls her argument “fundamentally unsound” and demands documented evidence, which the student insists does not exist, since the slaves most affected left no written record behind. The teacher offers to help with finding more primary sources than the Internet; the student ignores the offer.

Once the gloves come off, bilaterally, and the civilized ‘niceties’ are dispensed with, the swearing begins, insults are hurled, personal details (psychological, sexual) are dragged out, and irrevocable things begin to happen.

Radical revolution is on the table, as is racism. Insensitive comments are made. A phone video is created and widely disseminated. The levels of compassion, compromise and mutual understanding are low, but the stakes are high. Future careers are on the line — both of them.

Eleanor Burgess’ 2018 debate drama, based on her own experiences and conversations at Yale in 2015, is a perfect vehicle for the female-focused Moxie Theatre. And an effective filmed production, on a fully designed stage, socially distanced, sure beats a Zoom presentation. There’s even a “Making Of…” documentary in the works, a sneak-peek of which is shown at each performance. There’s live content pre- and post-show, with audience responses/reactions encouraged.

At the play’s outset, the teacher, Janine (effective Mouchette van Helsdingen) is overly pedantic and patronizing. Having been a long-time professor myself, I found her stilted dialogue far-fetched.

Zoe (ebullient Deja Fields) is always credible, if unyielding and didactic in her own right. She’s not the obvious ‘victor’ in this intellectual/historical duel. Far from the unequivocal weighting of the similarly structured “Oleanna” by David Mamet, the balance and equilibrium here keep shifting.

Despite its shaky linguistic start, the play finds its power in the balance, and the fact that you might find yourself switching sides and loyalties multiple times.

The piece premiered shortly before the 2016 election. At that time, there was a sense that the country was making incremental progress. We were just coming off eight years of a Black presidency, with a woman poised to take her place in the Oval Office. Things didn’t turn out as anticipated, as we all know.

If the play had been written today, the patience/wait-and-let’s-see attitude the professor recommends (which Blacks have been hearing for 400 years) would be significantly less acceptable — to all generations. Incremental baby-steps of change are also less acceptable now. Maybe a ‘radical revolution’ is what’s required; tear it all down to build it up better, as Zoe puts it.

In any event, every viewer will bring their own perspective, education, age, race, experience (and historical indoctrination?) to the piece, and that will color the response to the onstage argument.

One lesson the professor is forced to learn, one we’re all learning in this BLM era, is when a person of color says ‘I have an idea’ or ‘I have something to say,’ you should, as Zoe so indelicately puts it, “Shut up and listen.”

Director Delicia Turner Sonnenberg finds creative ways to keep a semblance of action alive amid the blizzard of words and viewpoints.

Ultimately, neither character is wholly right, and both are wholly self-righteous. There are no easy answers here. But no one ever said Democracy would be easy. We’re understanding that at a deeper level every day.