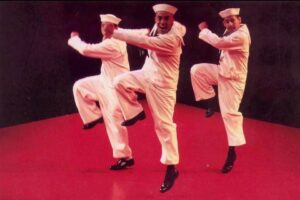 For two months, we’ve all been attentively Zoomed in. But are we getting Zoomed-out?

We’ve been Zooming along, with meetings and readings, classes and confabs, virtual happy hours and birthday parties. Taken altogether, it can all be a bit much.

But since it seems like it’ll be a good long time before we all convene in a theater again, San Diego theatermakers are continuing to explore and exploit the medium.

In its most recent ZoomFest productions, Moxie Theatre has been experimenting with interactive theater, in the form of  a choose-your-own-ending show and a murder mystery that included some audience members as characters/suspects.

The one element that unites these two new ventures is prolific local theater artist Herbert Sigüenza.

He’s reuniting with his buddies from the nation’s premier Latino performing group, Culture Clash (which he co-founded in 1984 with Ric Salinas and Richard Montoya) to present “The Totally Fake Latino News with Culture Clash” at the La Jolla Playhouse. The free, 10-minute doses of “levity, poetics and payasadas” (clowning), will run through October.

Meanwhile, at the San Diego Repertory Theatre, where he is Playwright-in-Residence, the multi-talented and ever-busy Sigüenza will write and direct a new weekly streaming project, “Beachtown Live!”

Sigüenza introduced us to “Beachtown” in 2018, a fictional community not unlike the coastal neighborhoods of San Diego. The show was based on the play, “Beertown,” a prototype created by dog + pony dc, a theater company that specializes in immersive productions. Rachel Grossman, a D.C.-based director and playwright, is back again to work with Siguenza as engagement consultant on the project. Together, they’ll make sure the piece is local, personal, Zoom- interactive and, like its predecessor, never the same twice.

Starting June 3, and every Wednesday through July 29, you can join the original denizens of the seaside community (at no charge!), as they grapple with the global pandemic crisis.

Sigüenza promises comedy and music, as the Road to the Future Task Force deals with the challenges the coronavirus has presented. All (but one) of the regulars are back: Jason Heil as the surfer-dude Mayor, along with an array from all points along the political spectrum: the Mexican-Jewish moderate-conservative councilman (Salomon Maya); the right-wing reporter (Antonio “TJ” Johnson); a hippie-ish liberal citizen (Marci Anne Weubben); a Barrio Chicana activist (Sandra Ruiz); the town musician (William “BJ” Robinson); and (new addition) the town archivist (Mondis Vakili).

You can do your part in helping them decide when and how to open beaches, parks, schools and offices, and deal with other timely issues.

Sigüenza admits that he’s not a fan of Zoom play-readings.

“I wanted to deliver something where Zoom was the medium, but with audience interaction,” he says. “They can ask questions, voice opinions, and be part of a simulated – but real-life – narrative that we’re having now in San Diego, our own little beach-town.  Balancing commerce and safely, health and wealth. Considering the recommendations of the Mayor and the Governor.

“But the difference is,” he continues, “we don’t want to re-create CNN and their experts. It’s gonna be humorous. It’s gotta be funny, even a little crazy. We’re not here to expose the issues. The issues are on TV every day. We’re pointing out how dark and surreal all this is.”

Audience member participants are free to create an avatar if they like, “depending on how much you want to create, or make believe.”

The logistics include the regular Chat feature, and a button for Raise Your Hand. The stage manager handles all the online, in-the-moment details, unmuting speakers when it’s any given observer’s turn to talk.

“All this will be explained beforehand,” says Siguenza.

Explanations, as we all know, are a regular, time-devouring part of every Zoom performance these days.

“We’ve scripted two or three already,” Sigüenza says of the ten shows that will ultimately be produced. “But things are changing day by day, and we want to stay current and don’t want to get ahead of ourselves. The scripts are about 10-15 minutes each, but that will be followed by about 15 minutes of interaction. I figure 30-40 minutes total.

“The scripts are just a roadmap. This cast is all skilled at improvising. We’ll get more creative as we go. Maybe there will be breakout sessions or thought-bubbles or word games or puzzles in later shows.”

During the quarantine, Sigüenza taught himself video editing. He has already created video cartoons and short films for the Rep, and he’ll be using those skills at the Playhouse, too.

“The Totally Fake Latino News with Culture Clash” is a sketch show, it will be pre-recorded, which will allow for “more sound editing and more bells and whistles.

“There will be more about the culture, the border, how the pandemic is affecting Tijuana and the barrio. We’ll have animations, reports from Mexico City. I play a guy from the Mexican film industry, and I’ve created posters. We have some funny titles. Ric [Salinas], who’s such a great mime, did a whole silent film about staying home. There’ll be one silent film per episode. Richard [Montoya] is always Richard, the smart-aleck that everyone loves and hates.”

This past Cinco de Mayo, the trio celebrated 36 years together.

“I guess we’ve grown up a little bit, since the beginning,” he admits. “We’re all 60 or 61 now.” He doesn’t sound totally convincing. “After all these years and productions, we still have great chemistry.”

For the pseudo news show, there’s no third-party director; Culture Clash is directing themselves.

So, be prepared! Anything can happen. That’s kind of true of both new ventures.