“ONCE” at Lamb’s Players Theatre 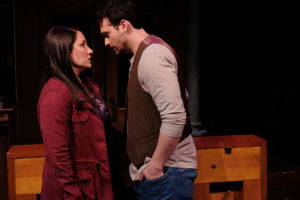 Once upon a time, there was a low-budget indie movie shot in Ireland in less than three weeks. The stars (Glen Hansard and Markéta Irglová, who was only 17 when the movie was made) wrote all the songs for the quirky, romantic musical drama.

It became a sleeper hit and went on to win the 2007 Independent Spirit Award for Best Foreign Film. The song, “Falling Slowly,” won the 2008 Academy Award for Best Original Song, and the soundtrack was nominated for a Grammy Award.

So, it was a no-brainer to move the story to the stage.

In 2012, “Once The Musical” opened on Broadway and was rapturously received, garnering  11 Tony Award nominations, winning eight, including Best Musical and Best Book (by Enda Walsh). It also won a 2013 Grammy for Best Musical Theater Album.

The national tour made a brief stop in San Diego in 2014, but Lamb’s Players Theatre is presenting the first locally staged production. And it’s a knockout.

Director Kerry Meads has done a masterful job, soliciting the help of ace choreographer Collen Kollar Smith, who adds some stylized moves to the quirky but generally realistic show.

The 12-member cast is phenomenal. Each plays at least one instrument; several folks learned an additional instrument just for this production: Deborah Gilmour Smyth picked up the accordion and Kent Brisby learned banjo). The presence of strings (two violins, a cello) in the mix adds so much to the distinctive, haunting score. Five songs were taken out of the film, and six new ones (all but one, “Abandoned in Bandon”) were also written by Hansard and Irglová).

At the center is a kind of eccentric pair: Guy (Michael Louis Cusimano), a street musician by night and vacuum cleaner-fixer in his Da’s shop by day; and Girl (Caitie Grady), a kooky, unconventional Czech whose English is accented but delightful and whose Czech, along with her mother’s and assorted others’ is spoken in English and translated in projections. Very effective. The dialect coaching of Grace Delaney (two Irish dialects… one for Dublin and one for the looked-down-upon Cork resident) and Vanessa Dinning (England-born, but she did one heckuva job on the Czech).

Cusimano and Grady are terrific together. Both wonderful in the awkward, hesitant moments and heartbreaking as they sort of come together. Grady is a revelation in this role; her singing and piano playing are marvelous, as are her deadpan humor and aching ambivalence. Cusimano is excellent on guitar and vocals, though his mic could be boosted a bit; some of those low notes got lost on opening night. Their duets are lovely.

He is desolate when she meets him, and encourages both him and his songs. They take their collaboration all the way to a recording studio. She gives him confidence and a new lease on life. He gives her the gift of music.

This is otherwise a real ensemble piece, but there are some standouts.

Manny Fernandes is a hoot as Billy, the gruff but protective music-shop owner, who brings humor and heart; Gilmour Smyth has a wonderful monologue, and of course, adds her superb soprano to the mix. Temi Henson is a charismatic singer/actor/cellist; Luke Monday, an expert violinist; he and Arusi Santi have some funny/poignant moments.

Musical director G. Scott Lacy makes a welcome return to San Diego, and brings his impressive expertise. Musically, this mega-talented cast is nothing short of amazing. Their a capella, all-harmony rendition of “Gold” is like the voice of angels; literally breath-taking.

Sean Fanning’s set is a marvel: a very detailed wood-walled bar (selling actual drinks before and after the show, and during intermission; Guinness is among the offerings, of course.) Atop the bar is a windowed stone edifice providing a viewpoint for the couple to watch the river (nice ambience there, from sound designer Patrick Duffy), and in front, a cobblestone street. The whole set looks like it was lifted directly out of Dublin.

The lighting (Nathan Peirson) and costumes (Jeanne Reith) are effective, and the energy of the whole piece – both the romantic and the ebullient musical moments – is galvanizing. The unpredictable musical story makes you want to clap along… and consider your own feelings about taking chances and making commitments.