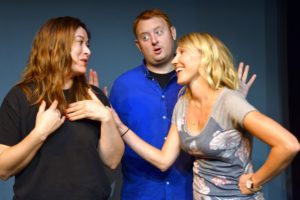 The improvisers are improvising – in a whole new way.

National Comedy Theatre, San Diego’s longest-running improv show, has been doing short-form improv, in the style of “Whose Line Is It, Anyway?,” for two decades. Now the group is trying an ultra-long-form experiment, called “Offstage.”

The action follows a touring theater troupe. On the last two Thursdays of the month, the same seven performers will appear – all from NCT’s mainstage A-team – as actors in the company, and the audience will tell them where they’re performing next and what items they might need on the road.

Every performance will be completely different, though the storyline and quirky characters will be ongoing. Kind of like an improvisational sitcom.

On opening night, each of the skillful performers, with the help of the others, was trying to figure out exactly who their characters were. It was fun to watch the personalities and physical quirks emerge and solidify over the course of a mostly fleet-footed hour.

The bright-eyed, Bible-thumping ingénue tangles with the oversexed, self-proclaimed Legend, the ingénue has-been. The gay guy keeps coming on to the straight-ish newest arrival. The stage veteran, played by NCT founder Gary Kramer, is desired by both actresses, but he’s trying not to lose another job by sleeping with everyone in sight. The spider-woman of the group constantly starts gossip and makes trouble. And the beleaguered stage manager has to keep everyone together and everything going smoothly.

So far, the characters are more Types than fully-fleshed people. As in a real theater company, there’s plenty of time to develop and destroy relationships – and that should encourage repeat visits.

It’s a cute but not revolutionary idea, and like most improv shows, there are slow moments, and hilarious ones. It’s amazing how well the sound and lighting crew tracks and underscores the action.

Theater troupes, working closely day and night over time, form a kind of family. And everyone knows how dysfunctional families can be.

Give them something off-the-wall to work from, and they’ll grind it up into a crazy kielbasa of comedy.