“BULL IN A CHINA SHOP” at Diversionary Theatre 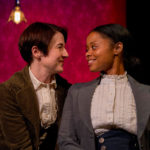 The play begins in 1899, but it feels as fresh as this morning. It’s a story about women fighting for something more basic than equality – their personhood. Amazing that, 70 years later, we’re still engaged in the same battle.

Of course, this is not accident or coincidence. “Bull in a China Shop” was written by Bryna Turner at the beginning of 2016 (and things have gotten worse for women since then). But even before the election, she saw how a powerful female was being maligned and disparaged.

Not so different from the plight of Mary Wooley (1863-1947) — firebrand, rebel, revolutionary.  Also educator, peace activist and suffragist. And the President of Mt. Holyoke College in Massachusetts for more than three decades (1900-1937). She was also, fairly openly, in a relationship with a woman, Jeannette Marks, a former student 12 years her junior, who became a beloved, rabble-rousing professor at the college. They were lovers for 55 years.

“Bull in a China Shop,” the self-proclaimed epithet that refers to Wooley’s uncompromising, take-no-prisoners style, is not just a feminist screed (though it is, occasionally, that). By the playwright’s description, her work is “an excavation of queer history.” She says she’s “queering history” with this “startlingly contemporary play.”

Clearly, Turner is giving history a particular slant, in order to let unheard, stifled or ignored voices be heard. In this vein, she also requests that the casting be multicultural.

She has achieved her goals at Diversionary Theatre. The cast is diverse, and Turner’s dialogue features raw modern vernacular (with F-bombs galore). The interstitial music is hip and female (like the slow-burn cover of Springsteen’s “I’m on Fire” by Soccer Mommy).

The setting is Mt. Holyoke (playwright Turner’s own alma mater), still a women’s liberal arts college. It was the first of the Seven Sister schools which began, in 1837, as Mt. Holyoke Female Seminary.

The play’s inspiration was the actual letters (lush, florid, Victorian) between Wooley and Marks.

So besides taking an important chunk of history out of the dustbin of time, Turner is chronicling the ups and downs, the challenges and courage required to make significant social change – and to sustain a long-term relationship.

Since so much territory is covered (40 years in 90 minutes), these two lives are seen through ‘snapshots,’ short scenes that, with one backstory exception, are presented in chronological order. This makes for a somewhat choppy (or cinematic) structure, but director Kim Strassburger and sound designer TJ Fucella make sure the scene changes  are quick and the music compelling.

The scenic design (Ron Logan) is simple, with four red pillar/panels and a bucolic background of dark blue trees on a paler blue ground — a reminder that Holyoke was far from the city, i.e., Boston. The lighting (Curtis Mueller) and costumes (Beth Connelly) effectively mark time and place.

As Wooley, Jo Anne Glover is a severe, unyielding, indomitable force. This Wooley  knows what she wants and she insists on getting it. Most of all (besides her wanting Marks), she wants the school to produce not “good pious wives” but “fully evolved human beings.”

Revolutionaries aren’t big on compromise, but Wooley is forced to bend – in her job and in her relationship. Ultimately, she’s also forced out of the President’s office – and replaced by a man. Over time, she changes her view on women’s suffrage – ambivalent at first, and then a major, prominent proponent.

Tamara McMillian starts off a little tentative, but gains in power and assertiveness, just as Marks herself did. Maybelle Covington provides a jot of comic relief as a fellow professor. Andrea Agosto gets all gushy as an adoring lesbian-in-waiting who falls hard for Marks. Her jilted love you/hate you, rock-throwing soliloquy outside Marks’ window is a bit over-the-top, but the breakup push/pull emotions are certainly recognizable.

Milena (Sellers) Phillips could bring a tad more nuance and layering to the role of the Dean, caught between her sometime sympathies with Wooley and the constricting demands of the donors and board members who are uncomfortable with the Wooley/Marks relationship.

This is a fierce and forceful production, but it doesn’t seem like a comedy, as billed. It’s more earnest than amusing, and at times leans on the didactic – even in relationship scenes. But the commitment of everyone involved is palpable.

The last line strikes a chilling note. Wooley, having just lost her job as President, says to Marks, “Something good has got to be coming – later, much later.”

Admittedly, some good has come in the past century. But so much of what’s been gained is once more in jeopardy– and it’s later than you think.