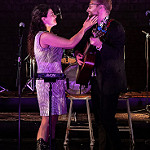 Memoirs are tricky. What makes some else’s life story more interesting or stage-worthy than yours? Usually, there’s trauma and heartbreak. Love and loss.

In the case of “Hundred Days” at the La Jolla Playhouse, the trauma happened in the past, when book, music and lyrics co-writer Abigail Bengson was 15. We never get her full backstory, but she alludes to familial madness and illness.

Most of this folk-rock performance focuses on how the Bengsons – Abigail and Shaun – met and married, in three weeks. They both instantly knew they’d found the love of their life. But it terrified them. They were paralyzed by fear, and felt forced to confront their mortality.

Abigail panics, fantasizing an illness that would give Shaun only 100 days to live. She’s a wild-eyed extrovert; he’s a confirmed introvert. Neither can deal with the intensity of their love. So they decide to live their lives as if they only had 100 days together.

The Bengsons try to universalize their story by suggesting that everyone should do as they’ve done: stretch time by making memories and being conscious of every moment.

The conceit only sometimes works. The piece often feels patently self-indulgent. The static nature of the storytelling is broken up by adding four gifted musician/singers, with their stunning harmonies and ritualized gestures, created by movement director Sonya Tayeh and acclaimed director Anne Kauffman, a UCSD MFA alumna.

Abigail carries the show, with her amazingly versatile voice, ranging from country to rock and blues, from syrup to growls and wails.

But the piece remains more concert than play. Its quirky music and offbeat romance are reminiscent of the musical, “Once.” The book, co-written with Sarah Gancher, could be more expansive, less intensely personal. Most spectacular and symbolic in this production is the trickling sands of time, descending into pools of light.

There’s talent and imagination here, to be sure. But ardor observed does not necessarily impassion an audience. Theater is not just about telling; it’s a lot more effective with some doing and showing, too.