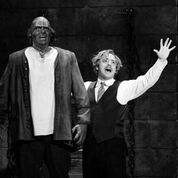 The raunch factor is high. The laugh factor aims high – or should I say it aims low, below-the-Borscht Belt low.

Although it premiered in 2007, the show is still called “The New Mel Brooks Musical: Young Frankenstein.” San Diego Musical Theatre is doing everything possible to make it feel new again.

Naturally, there’s a doctor and a monster. Frederick Frankenstein is a New York medical school Dean of Anatomy who specializes in the brain. He’s the grandson of the famous Victor Frankenstein, crazed creator of the original Monster, an experiment in revivifying that went horribly wrong. In an effort to separate himself from his legacy, Frederick insists that his name is pronounced “Fronk-en-STEEN,” a gag that wears pretty thin on repetition. Somehow, Gene Wilder, who co-wrote the movie with Brooks, made it work.

It’s 1934. Frederick is informed of his grandfather’s demise, and told he must go to Transylvania to settle the estate. That’s where he meets the yodeling sexpot, Inga; the nutball humpbacked assistant , Igor (that’s EYE-gore), and the creepy housekeeper, Frau Blücher, who makes the horses whinny and rear (very imaginatively here) every time her name is mentioned, though as in the movie, we never learn why.

Frederick gets sucked into “the family business” and soon another monster rears his ugly green head. But this one has a brain and a heart (and a ginormous organ, we’re told several times).

Brooks pulled out every trick, shtick, pun, innuendo and one-liner in his bawdy book. But the show, with a book co-written by Thomas Meehan, is at least 1/2 hour too long, and most of the songs lack Brooks’ wacky signature wit. There are too many extraneous numbers; some, like “The Happiest Town in Town,” don’t even have counterparts in the film. The piece also feels structurally clunky, with too many obvious ‘delay tactics’ to allow for behind-the-curtain scenery changes (or maybe that’s just a production issue).

What makes the SDMT production soar is the energy; the unmistakable joy in the hijinks; the superb 14-piece orchestra that sounds like 50, as conducted by masterful music director Don LeMaster; the exuberant direction (Larry Raben) and choreography (Daniel Smith); and a great cast.

Jonathan Sangster is flat-out hilarious as Igor (were some of those really funny lines ad libbed?). There are clearly topical updates, but there were some other gut-busting comments that helped rescue the show in its sluggish moments. Kelly Derouin is adorable and amusing as Inga, and as the fearsome Frau, Christine Hewitt is austerely Teutonic, with phenomenal chops, though maybe not as funny as other Fraus I’ve seen. As Frederick’s “Don’t Touch Me” diva fiancée, Melina Kalomas is deliciously over-the-top, as are her fabulous wigs (Peter Herman) and stunning costumes (Janet Pitcher).

As The Monster, Donny Gersonde displays humor and terpsichorean talent – especially impressive tapping in those super-high, cloddy platform shoes.  “Puttin’ on the Ritz” remains the show’s highlight. Brooks didn’t write it (Irving Berlin did), but he sure put it to unforgettable use.

The set (attributed to NetWorks and local scenic artist/carpenter/designer Mathys Herbert) is a bit clunky to move around at times, but the cleverly designed lighting (Michelle Miles) features some fun special effects.

So, despite the weaknesses and slow spots of the show (“The Producers” this isn’t), the San Diego Musical Theatre production might still give you a few monstrously big laughs.