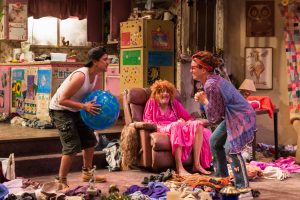 If you have any penchant toward Political Correctness, Taylor Mac is here to disabuse you of every sacrosanct notion, every sacred cow, every meme, trope or bromide about… well, just about everything.  Tighten your seatbelts; it’s gonna be a bumpy (but uproarious) ride.

Mac, an acclaimed New York writer/composer/performer, is a pioneer of questioning gender norms who prefers to be referred to by the pronoun “judy,” in homage to Judy Garland. judy is out to topple the patriarchy and pulverize kitchen-sink drama.

In judy’s 2015 pitch-black comedy, “Hir” (pronounced HERE), besides slyly referring to this moment, now, the title is a third-person gender-non-specific pronoun that replaces ‘his’ or ‘her.’ (FYI, ‘Ze’ (pronounced ZEE) is the replacement for ‘he’ or ‘she’). And in case that isn’t enough, the play is happy to advise you of the full gender alphabet: LGBTTSQQIAA, which they pronounce “Lug-uh-BUTT-skwee-ah.”

“Hir” is all about change and ‘paradigm shifts.’ Out with the old; in with the new. Eschew patriarchal domination and gender specificity. Free yourself from bondage.

Your first glance at the set (a marvelous, messily detailed creation by Sean Fanning) tells you a lot about this family. You can barely take it all in at once. This is unlivable living, with not an inch of empty floor-space. Piles of clothes, toys, books, newspapers and other detritus compete for ‘worst room ever’ honors with the disaster area that is the kitchen.

Arnold, the father, is dressed in a frilly pink nightgown, bedecked in garish clown makeup. Ever since he had a stroke, Paige is hellbent on emasculating and infantilizing him. She drugs him into docility with estrogen and squirts him with a water-bottle when he doesn’t do as she says.

This is the ultimate in role reversal: Arnold was controlling, physically and emotionally abusive and adulterous. Now Paige is in charge, she’s in revenge/revolt mode, and she’s fully liberated: from Arthur, from housework, from school for her kid, from any kind of household organization (“We don’t do order,” she proclaims).

This is what Isaac, a Marine who’s been in Afghanistan for three years, comes home to. He’s gobsmacked. He doesn’t recognize anything. And he hasn’t even seen his tomboy sister yet. The former Maxine is now Max (thanks to a DIY gender transition), who just wants to retreat to a “radical fairy commune where they have gender queers.”

“Explain your gender ambiguity to your brother,” Paige says helpfully.

Isaac’s response to all this (well, to almost everything) is to vomit. “That’s what we do,” he says of his combat duty, Mortuary Affairs, which means  he picks up guts, brains and other exploded body parts.

Family power dynamics are shifting, from father to mother to son to the non-binary offspring.

Isaac tries to restore order, clean the house, assert his masculinity, even take care of his father.

Paige will have none of it. “We will not rewrite his history with pity,” she admonishes. During a family fun hour of shadow puppet show, she details some of Arthur’s worst offenses.

At Cygnet Theatre, under associate artistic director Rob Lutfy’s spectacularly specific direction, the first act is nonstop hilarity (of the very darkest kind). Inevitably, things take a much bleaker turn in Act 2, as the family implodes and explodes.

The timing and physical comedy are superb. Lutfy has cast wisely.

Joel Castellaw has a spacey, long-haired, ex-hippie look, but he gives glimpses of the angry, bigoted macho plumber he was before he was debilitated and became nearly non-verbal. Dylan Seaton is spot-on – in look and demeanor – as the PTSD vet who doesn’t even know he’s out of control. His version of manhood was shaped by his father and the Marines, and this is his day of reckoning.

Avi Roque, who self-identifies as a Latinx Trans/Non-Binary individual, is perfect as Max, able to assert both his masculine and feminine sides at will – and often hilariously.

At the center of the maelstrom (usually creating it), is the force of nature that is DeAnna Driscoll. Every time you think you’ve seen her take her skills and emotions as far as they can go (most recently, at Cygnet in “The Effect of Gamma Rays on Man-in-the-Moon Marigolds,” for which she won a 2017 San Diego Theatre Critics Circle Award for Outstanding Female Performance in a Play), she goes seven steps further. This is a bravura, tour de force performance. Not only is she antic and manic, handling Mac’s fantastic linguistic flights-of-fancy with tremendous agility, but she is expertly physical, somersaults and all. She barely takes a breath in two hours.

Even if her character isn’t always commendable, shemakes Paige lovable in a crazy way, because Driscoll is so completely riveting. You’d think that the few times she leaves the stage, the energy would flag, but the men do a yeoman’s job of keeping the intensity high, thanks to their and Lutfy’s skill.

What you’re seeing here, between the laughs and sometimes, horror, is nothing less than Mac’s decimation of the American Family, the American Middle Class and the American Dream.

At the end, Paige is marching gleefully into the future, schooled by her gender-fluid, cliché-spewing child, leaving behind binary choices and “troglodyte heteronormatives.”